5 questions for a master magician

It’s not often we have a Vegas-sized magic show in town, but there’s a chance to see one April 12-14 when the Denver Center hosts “The Illusionists — Live From Broadway.” A teaming of some of the top illusionists in the world, the show has been all around the globe.

We had a chance to catch up briefly via email with one of the Illusionists, Paul Dabek. Here’s what he had to say:

OnStage Colorado: What’s the main differentiator between your show and other illusion or magic shows with which people may be familiar?

Paul Dabek: The show integrates live video from a three-strong video team. We have a live camera feed at all times on stage which gives the audience a brand new “back stage” view during the show.

OSC: How did you start as a magician and what were some of the steps to your trajectory and where you are now?

PD: I started performing magic at the age of 3, however I must admit my parents weren’t as impressed as they may have made out. I’m happy to say that these days they don’t fake their applause. Over the last 15 years I have performed all over the world with my solo show. I’m delighted to have the opportunity to tour with such a talented group of performers.

OSC: From a performance perspective, how does this kind of large-scale show differ from other types of smaller magic? 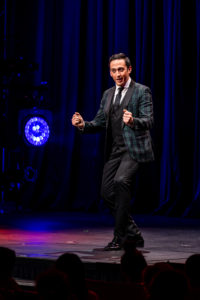 Paul Dabek works the crowd with The Illusionists.

PD: The show takes you on a journey from the largest illusions to the smallest magic and back again. Often that smaller magic can’t be shared with a large audience, but due to our live cameras and huge HD screens, even people at the back of the theatre can feel like they have a front-row seat.

OSC: It sounds like illusions are just one aspect of a show that includes a lot of humor and other performance aspects. How important is it to offer audiences a range of things to see and hear?

PD: Variety is everything, the show moves at breakneck speed from performer to performer it keeps everyone engaged.

OSC: How might you encourage someone to see The Illusionists if they are perhaps a bit skeptical about enjoying a magic show?

PD: There truly is something for everyone in this show. No matter what your age or whether you are a magic fan or not. We guarantee you won’t be disappointed.

Video: The Illusionists in action

What: ‘The Illusionists – Live From Broadway’