A fresh spin on Scrooge in Littleton

Littleton’s Town Hall Arts Center puts a thoroughly fun and very fresh spin on a familiar favorite – “A Christmas Carol” – that leaves the audience in high and festive spirits.

And perhaps even with a bit of renewed faith in mankind.

The musical production of this timeless classic is filled to near-bursting with song and dance, delivered from an all-around impressive cast. The celebratory feeling of the holidays is set with the opening number, and woven repeatedly through the remainder of the production. Those big and boisterous numbers keep the scattered dark scenes from completely dimming the holiday glow.

Ebenezer Scrooge (Stephen Turner) earns the spotlight role with a multi-faceted performance, seamlessly transitioning from the slump-shouldered, cane-crutching curmudgeon of the early scenes to a frightened, convincingly wistful and remorseful Scrooge at the play’s center and, finally, to a dancing, jubilant and ecstatically repentant character of the production’s final scenes. 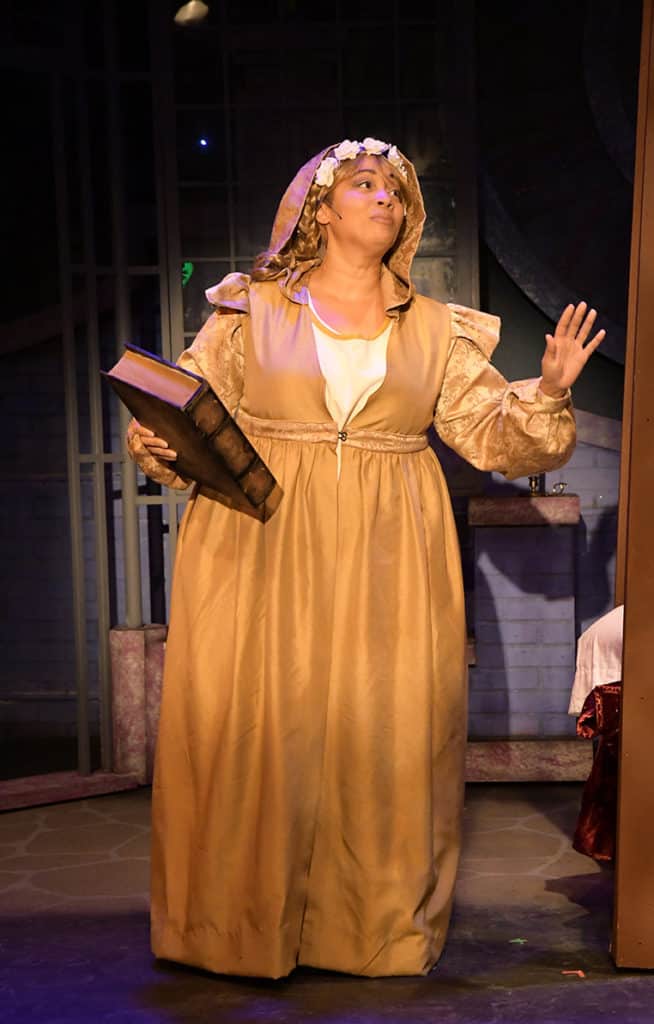 Rajdulari as the Ghost of Christmas Past.
Photo: Gary Duff

Turner’s is the most memorable of many notable roles: The almost grating goodwill and cheer of alms-collecting Jonathon. The twinkly eyed, tap-dancing Ghost of Christmas Present who serves his often-ominous message with a heavy dose of mischievous fun. And the angelic Tiny Tim, whose sweet voice and beatific expressions are sugary sweet, but nevertheless carry the ring of sincerity.

Likewise, the musical is rife with memorable scenes.

The company dance scene from Christmas past is enough to make one wish they worked at Mr. Fezziwig’s Bank. While the boisterous Christmas company party is common enough, few include co-workers who can dance like these.

Children in the audience seemed to enjoy this production but warning: There are a couple of potentially nightmare-inducing scenes. The chain-laden Marley and the ghouls that accompany him to Scrooge’s bedroom could easily put fear in more than just the fictional Scrooge. And the graveyard scene of Christmas Future with its black-robe-clad dancing spirits is also potentially spooky for youngsters.

But these dark scenes are far outnumbered by the celebratory ones, which set the over-riding tone for this fast-moving production. And the theme of compassion that’s woven throughout is a life lesson for young and old that bears repeating – and the message that rings clearly in the closing scene.

“A Christmas Carol – The Musical” is a thoroughly uplifting way to pay tribute to the Christmas season. It runs at Town Hall Arts Center through Dec. 23.

What: ‘A Christmas Carol – The Musical’