Eric Coble’s play about an elementary school in a liberal suburb trying to navigate the minefield of Black History Month is a crash-and-burn comedy where no one gets out alive. By the end of the show, the school motto — “Peace, Love, Respect for All” — is all but trampled into the ground as the parents and administrators strip off the veneer of PC civility and “appropriate” language and let their worst thoughts fly.

It shouldn’t have been that way. The show kicks off with Mrs. Wadley (a pitch-perfect Sheryl McCallum) as the school principal informing the assembled students about a reasonable-sounding plan to celebrate Black History Month. She’s only a minute in before she makes her first mini-gaffe, and we soon see Coble’s premise begin to appear: It’s impossible to talk about race at any length without putting your foot in your mouth at some point. The question is whether you can recover and correct quickly enough to continue moving ahead.

In Fairfield, the answer is an unequivocal “no” — and that’s where all the funny lies. In this production at Miners Alley Playhouse in Golden, director Jada Suzanne Dixon (a Curious Theatre regular making her directorial debut) takes an all-star cast and a wickedly clever script and delivers a high-impact, delightfully offensive night of theater. No slur is unflung, no racial epithet forgotten, and no opportunity to say the wrong thing missed.

The beauty of Coble’s script is how well he places the mines. It’s easy to see, in most cases, how anyone could have stepped on one or two of them.

But these characters step on all of them.

Principal Wadley’s primary cross to bear comes in the form of first-year first-grade teacher Laurie Kaminski. She’s played brilliantly by Adeline Mann as an agent of chaos disguised as a sweet, eager-to-please educator who just wants to do the right thing. When Wadley takes a look at her lesson plan for Black History Month, she notes that the word-find game contains gems like “chitlins,” “watermelon” and “fried chicken” — and that she wants to take a stab at “Roots” with her 6-year-olds.

It’s easy enough to scuttle “Roots,” but the word list has already gone home with the kiddies. And aren’t those actually cultural foods for African Americans? Well, yes, but …

Kaminski digs the hole yet deeper when, during a free-flowing discourse on evolution to her (unseen) class, she draws a line between our common ancestors in Africa to her own very white self and then to the monkeys we all sorta came from and she’s not saying African Americans are monkeys but …

And then there’s a role-playing game the zealous Miss Kaminski initiates where some of the kids portray slaves and the other slaveholders.

What could possibly go wrong?

As the audience groans and laughs at each progressive gaffe, we can already hear in our minds the phone calls into the principal’s office.

Representing the black parents are Kristina Fountaine and Sinjin Jones as Vanessa and Daniel Stubbs. They’ve moved their son to the Fairfield school district in hopes of a better education, but before long they’re confronting the fallout from the role-playing exercise: Their son has been called the n-word by a white kid, and then symbolically whipped with paper clips.

On the other side of the stage are Scott and Molly Flemmingsen (Brian Landis Folkins and MacKenzie Beyer), white parents who’ve made the sacrifice to send little Austin to Fairfield (rather than the private school) so he could get a little diversity. While Scott notes that Austin was just playing along with the exercise the teacher assigned (and wasn’t that paper-clip whip creative?), Molly is utterly freaked out that her little angel could have used the n-word.

Dixon does nice work playing these parents back and forth, and it’s fascinating (and very funny) to see how white parents and black parents react to the same information.

These are all tremendous performances, with Dixon helping the actors find a lot of great little moments that add to the comedy and consternation. 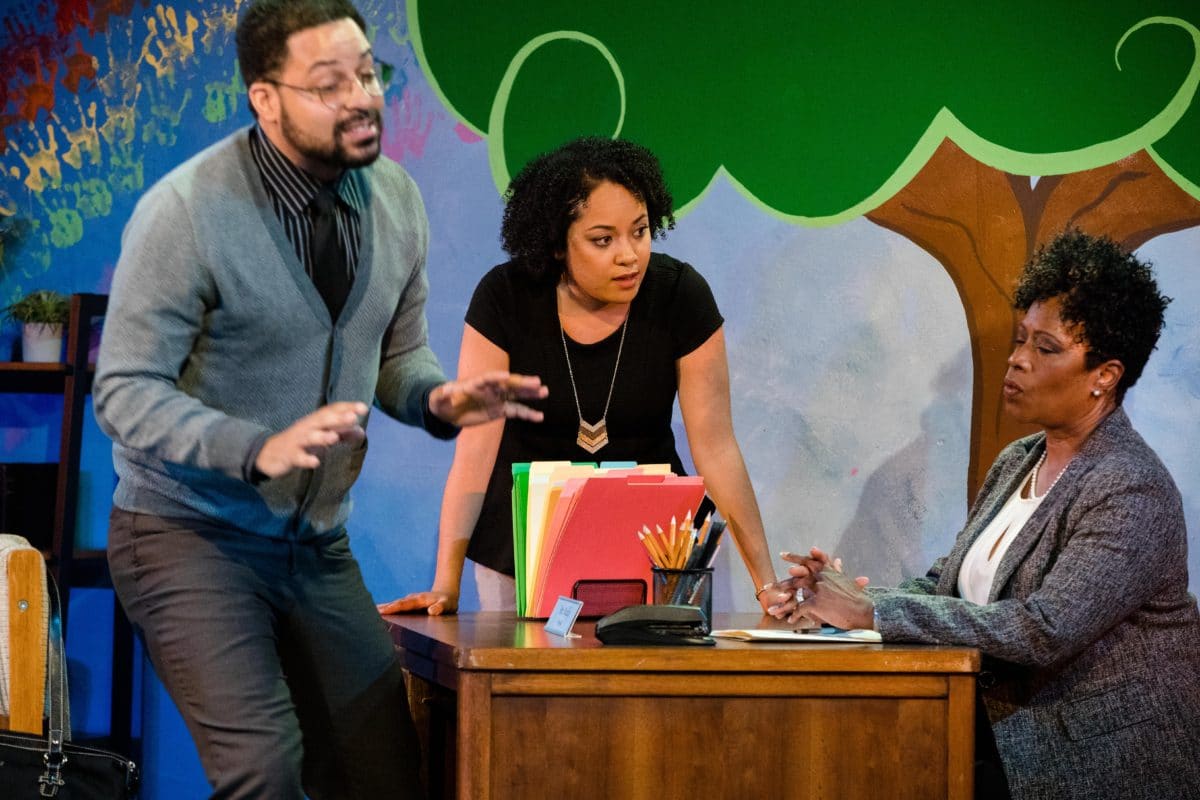