AURORA, Colo. – For the first time since 2020, the Aurora Fox Arts Center will present a full season of four mainstage shows and two smaller black box shows. The Aurora Fox’s 38th season will include Joan Didion’s theatrical adaption of her best-selling memoir, “The Year of Magical Thinking;” the Colorado premieres of “Futurity” by César Alvarez and The Lisps; “The Jedi Handbook” by Stephen Massciotte; “Toni Stone” by Lydia R. Diamond; a new musical adaptation of “Treasure Island” by Carla Vitale, Brett Smock and Corinne Aquilina; and the U.S.A. premiere of “acts of faith” by David Yee.

“The past two years have pushed the boundaries of what we thought we were capable of, as individuals and as a community,” say Aurora Fox Executive Producer, Helen R. Murray. “Our season will celebrate the strength of the human spirit with stories of the exact kind of bravery we all have shown throughout recent years and events.”

Since taking her place at the historic theater on East Colfax, Murray has doubled down on the Aurora Fox’s legacy of diverse storytelling, and this season will continue that tradition.

“These stories are diverse in their styles of storytelling; the lands where the stories take place; the time periods when the stories are told; and, of course, in the voices of the writers showcased,” says Murray. “What they have in common, however, is their nostalgic and at times challenging look into the history that has made us who we are today, what we have had to overcome, and in the brave new worlds we are creating.” 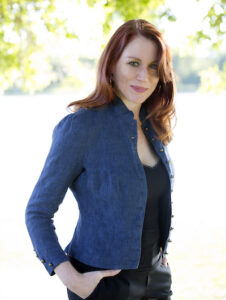 The Aurora Fox’s 38th season will kick off with “Futurity,” a new musical by York-based indie-rock band, The Lisps. The story follows a Civil War soldier named Julian Munro who joins forces with real-life inventor and mathematician, Ada Lovelace, to build a machine that eradicates César Alvarez and his New war and creates peace. “Futurity” will be followed up by Stephen Massciotte’s family-friendly play “The Jedi Handbook,” in the holiday slot. Massicotte invites audiences to experience the epic adventures of “Star Wars” through the eyes of two, young best friends coming-of-age in a galaxy not-so-far-far-away, when a certain sci-fi film changed the world (and schoolyards), forever.

2023 brings with it two very different one-woman shows: “acts of faith” and “The Year of Magical Thinking.” The U.S. premiere of “acts of faith” by David Yee follows a young woman named Faith (played by Colorado-based powerhouse, Betty Hart) from the African Copperbelt to the backwoods of Muskoka. When Faith is mistaken for a prophet, she begins to use her ‘gift’ and influence to right wrongs and to punish the wicked. It is a story about the eternal struggle between good and evil; the disillusionment of youth; and the power of belief. “The Year of Magical Thinking” is Joan Didion’s spellbinding adaptation of her bestselling memoir about her path to healing after the sudden loss of her husband and their only daughter.

Those two shows will run back-to-back on the same set, and will mark the official reopening of the Aurora Fox’s Studio Theater, that was been mostly out of commission since the Arts Center shut it down during the COVID-19 pandemic.

The Aurora Fox will welcome in baseball season with the Colorado premiere of Lydia Diamond’s biographical play, “Toni Stone.” Stone was a trailblazer and the first woman to play ball in the Negro Leagues. She also has the distinction of being the first woman to play professionally in any men’s league, anywhere in the United States.

The Aurora Fox will close out its 38th season with a new musical adaption of the beloved classic by Robert Louis Stevenson, “Treasure Island.” Subtitled “A New Musical for a New Generation,” this incarnation by Carla Vitale and Brett Smock with music and lyrics by Corinne Aquilina is being further developed at the Aurora Fox under the direction of Helen R. Murray who says this swashbuckling musical about adventures on the high seas will be perfect for the whole family!

In addition to the six productions in Season 38, the Aurora Fox will also be presenting a couple community events: an open house on June 4, 2022 and its first in-person gala in more than two years.

“Planning is still underway, but I can tell you that were are excited to have Black Iris Collective performing for our speakeasy themed event,” says Murray of the typically annual fundraising event that has left a giant hole in the theater’s operating budget since its indefinite postponement in 2020.

The Fox is also piloting a new arts-in-education program by partnering with area schools to present Thursday matinees of “Futurity,” “Toni Stone,” and “Treasure Island.” This will be the first time the theater has set aside certain performances specifically targeting young learners, and already those performances are nearly sold out.

“I am so excited to share next season’s shows with our community,” says Murray. “They all celebrate the joyous and heart-changing moments that we collectively experience in a story well-told and a life well- lived.”

For more information on the Aurora Fox’s 38th season, including information on special season ticket packages and our student matinees, please visit AuroraFox.org.

THE YEAR OF MAGICAL THINKING

TREASURE ISLAND – A New Musical for a New Generation

News from the Colorado theatre community