A slow burn of deceit on a wedding eve

In ‘Charlie’s Waiting,’ a couple putters around a metaphorical landmine

The big question that hangs over a good portion of Charlie’s Waiting is when, not if, the bomb will drop. Mêlisa Annis’s new play — showing at Denver’s Champa Studio in a production by And Toto Too — puts a unique twist on the classic drama surrounding the revelation and withholding of damaging information.

We’re somewhere in the English countryside, a bucolic area where wealthy, pregnant Louise (Amy Serafin) has brought her fiancée Kelly (Amalia Adiv) to live. The two women have made something of a pact to dispense with any potentially disruptive questions about their respective pasts, so when a third character appears with precisely that kind of information, the fuse is lit. 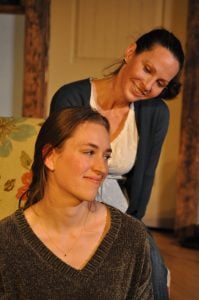 The spin is that this character, Annie (Jennie Leski) shows up at the top of the show, and we’re treated to an extended bit of uber-polite probing on Louise’s part as she tries to determine who this person is. An ex? A long-lost sister? Just an old friend? Why has she shown up on the eve of their wedding? And would she like some tea?

And where the hell is Kelly?

She’s out helping the neighbor tend to some goats, and she’s left her cellphone there at home. This leaves Annie in Louise in an awkward neutral zone as they wait. And wait some more. But there’s a bus to catch, and Annie can’t stay indefinitely — most certainly not for dinner or the wedding.

Louise gauges Kelly by her clothing and speech, eventually demanding how much money she wants to go away. Isn’t that how most problems are solved, with a payoff?

But Kelly’s ask isn’t monetary, nor is it negotiable. It simply is, it involves someone named Charlie, and there’s nothing Louise can do to make it go away. Her fancy, over-planned wedding, she frets, will be ruined.

And that’s the least of it.

Charlie’s Waiting is a relatively short play — about 75 minutes with no intermission — and in that time we get a good sense of what lies ahead. Annis has structured the play in such a way that a good portion of that drama lies beyond the scope of the script. It won’t be until after the final blackout that we can imagine the tsunami-level Sturm und Drang that will ensue.

Director Susan Lyles has a strong trio of actors to work with here, and she relies on them to work the necessary emotions in between the lines of Annis’s script. After Annie leaves, the pacing of the play is agonizingly slow at times, with the two women performing an elaborate dance of normalcy as Louise holds her cards and Kelly effects not to know what lies ahead.

For surely she does. She knows who Kelly is, she knows about the “Charlie” of the title, and she can only surmise that the pending revelation will dash the nascent marriage onto the rocks. Until that time comes, however, they can continue to putter about with their wedding décor, giggle about their Hawaiian honeymoon and shunt aside the skeletons popping out of the closet as if they’re minor inconveniences.

It’s painful to watch, and audiences may be forgiven for wishing they’d just have it out. As we wait for Charlie to stop waiting, every minute Louise and Kelly spend fucking around with decorative twigs is like some kind of literary penance.

It’s also very effective, and it gives Serafin and Adiv the challenge of having a series of largely meaningless lines while they convey the real truths with their faces, bodies and actions.

Charlie’s Waiting is a story about choices, and specifically what we do with information once we have it. Louise chooses to sit on what she knows, even as she’s aware that it’ll be a relatively short space of time before it’s all out. In any relationship worth preserving, holding onto damning information is like swallowing delayed-action poison — and some people do it for years. Charlie’s Waiting is an accelerated version of this, and most of us can relate. Maybe we were the info holder or the person on the other end, but we know the damage wrought by this kind of thing.

It’s an intriguing story, an intimate exploration of the frailty of newer relationships and a hard look at everything from wealth and class to the unfortunate tendency of things swept under the rug to pop back out. I’d have wished the pacing was tightened up a bit, but I’ll also acknowledge that’s what helps put the audience even more on edge.

Annis’s script is fiendishly clever, a well-crafted veneer of manners and patter atop the reality we all soon know about. There’s no last-second reveal; it’s all out there near the top, and all we can do is watch in anxious suspense as Louise and Kelly’s little boat heads toward the falls.

Listen to a conversation with director Susan Lyles and playwright Mêlisa Annis on the OnStage Colorado podcast.

What: Charlie’s Waiting
When: Through Nov. 16
Where: 1245 Champa Studio