Skip to content
Home/Posts/Reviews/Delightful, moving ‘Tell Me on a Sunday’ opens in Silverthorne
Previous Next

Delightful, moving ‘Tell Me on a Sunday’ opens in Silverthorne

The Lake Dillon Theater is almost always a sure bet for quality productions, and its latest, “Tell Me on a Sunday,” is no exception.

Director and LDTC executive director Joshua Blanchard brilliantly tweaked the lyrical script, originally written in 1979 by Andrew Lloyd Webber. In Webber’s version, the main character didn’t play piano, guitar or write music, but Blanchard decided to give the main character a reason to be singing about her love relationships throughout the show by not only making the character of this one-woman production a singer-songwriter, but also casting one. 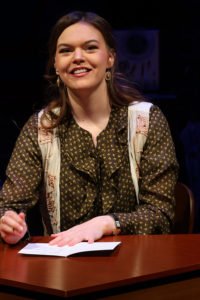 The fact that Emily Dennis— who carries the production superbly with her beautiful voice and acting — is also a multi-instrumentalist and singer lends more authenticity to the show. It makes sense for the character to sing her story, and, as a result, it quickly and easily draws the audience into the character’s mental and emotional roller coaster.

“Tell Me on a Sunday” consists of a song cycle (songs grouped together by theme or emotion). The main theme involves one young English woman’s experiences with love and loss in various forms. Though it doesn’t follow a specific time sequence, lighting, clothing and props cue the audience, as do the words of each song, so it’s easy to follow the story and roll with her emotions.

Dennis, an actress based in New York City, has performed at LDTC’s cabarets and last summer’s “Rock of Ages.” She is simply lovely in this song cycle, set in 1980s New York City. From the initial verses, it’s as if the audience becomes intimate witnesses of her ups and downs. And, somewhere along the line, audience members like me begin to truly feel her emotions; I teared up during her last letter to her parents in England.

Musical director Dan Graeber accompanies Dennis on piano. They’ve arranged the songs in an engaging way: Dennis may begin a piece on stage with the piano, and then, backstage, Graeber seamlessly takes over.

The songs range from clever and funny to touching and moving. Acoustic folk songs blend with more toe-tapping tunes and time signatures change quickly, resulting in a satisfying mix of genres, emotions and vocal range.

“Tell Me on a Sunday” imparts stories of vulnerability and resilience, ultimately leaving audiences with an optimistic feeling about all life has to offer.

What: Tell Me on a Sunday
When: Through June 23
Where: Lake Dillon Theatre, Silverthorne

About the Author: Kimberly Nicoletti