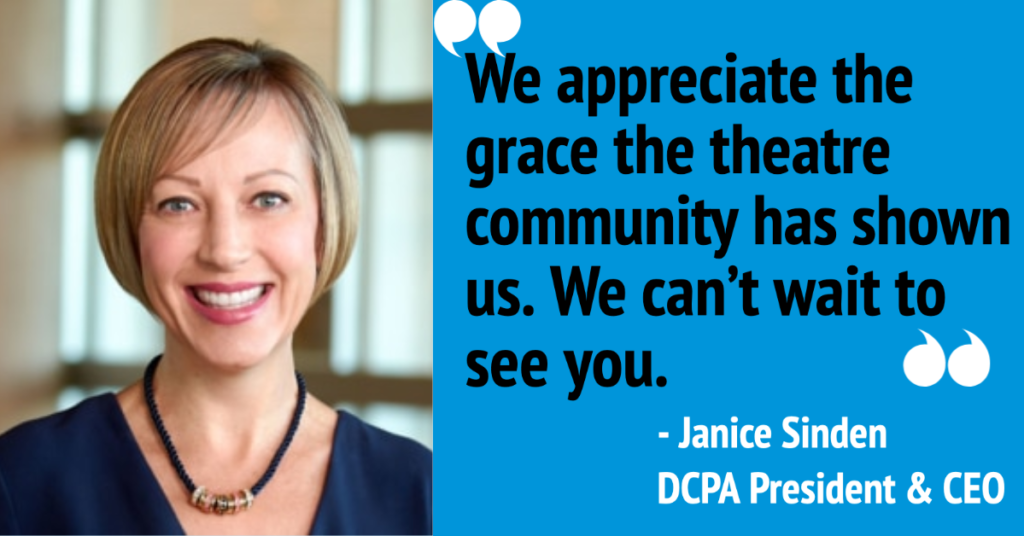 In early March, just two months ago, the Denver Center for the Performing Arts was riding high. Its theatrical venues full with Broadway and DCPA Theatre Company shows, the organization had recently announced its upcoming seasons for both. Along with the return of Hamilton in August, a lot of excitement surrounded the announcement of Theater of the Mind, an immersive theatre experience set for the fall co-created by former Talking Heads frontman David Byrne.

And then, coronavirus hit.

Along with theatres around the state and country, DCPA was forced to begin canceling or postponing shows. Layoffs and furloughs hit the staff, and a pall of sadness, inactivity and uncertainty settled over the Curtis Street arts complex in downtown Denver.

As of today, the Denver Center website still has shows on the calendar starting in August (including Hamilton, The Crown Live and 1776), but it’s far from certain whether any of those will go forward. (Update: The announcement to postpone Hamilton came May 14.)

To try to get a sense of where DCPA goes from here, OnStage Colorado met with Janice Sinden, the organization’s president and CEO. Over Zoom, of course, I asked Sinden how things were going, what might be next and how Colorado theatre patrons can expect the state’s flagship theatre organization to recover from this unprecedented state of affairs.

Editor’s note: The DCPA Theatre Company in late May announced the cancellation of its entire 2020/2021 season. Read more here.

OnStage Colorado: How is everyone holding up at the theatre company and among your audience?

Janice Sinden: It’s such a loving and understanding group. They know what’s happening with all the theatres across the country, so it was not surprising when we made announcement that we’ll have to be conservative. There are lots of broken hearts and quite a few tears. We had an all-company call May 7 to give the “whys,” but we don’t have a lot of answers. We’ve got to make the programming decisions first, and then see what the impact will be on people.

Right now, there’s no certainty around Broadway, which is such a big part of our business. Uncertainty is ongoing, with 17 cancelled shows and more to come. We’re trying to be patient and plan accordingly.

OSC: Where does all this leave the theatre financially?

JS: Like most nonprofits, thankfully, our organization has an operating reserve and we have a foundation that holds our net assets. We’re a Tier 1 with (the Science and Cultural Facilities District) which helps a lot so we can continue to invest in education programming. So that’s a great area for us to focus in this year for students of all ages. Our (fundraising) Gala would have been this Saturday, so we’re trying to keep those folks engaged. The Women with Hattitude event was canceled, which helps support the Women’s Voices Fund. A heartbreaker. Plus, the (Sewell) Ballroom had to cancel dozens of events through July. That’s such an impact on the rest of the community, since many nonprofits used the ballroom for their fundraisers.

OSC: Lots of theatres are doing virtual events and performances online. Does DCPA have plans for that kind of thing?

JS: We’ve talked about maybe doing a virtual gala, virtual corporate events. We’ve also stood up an interim content working group chaired by (DCPA Theatre Company artistic director) Chris Coleman and Lisa Mallory, our vice president of marketing, to think of things we’ve done in the past to introduce the community to actors and playwrights and literary readings. We’re working on a plan right now, trying to figure out what would be interesting. We don’t want to put out content just for the sake of doing it; we want to ensure it’s something that would be of value to patrons.

It’s probably not going to be much in the way of putting shows up online. We have a wonderful team going through the archives to see what we have. But we’re live theatre, and we don’t want to send a message that we’re trying to replace that.

The last Broadway touring show at the Denver Center was ‘The SpongeBob Musical,’ which had to be canceled early in the run due to coronavirus.

JS: The greatest question of all time is how to bring people back. Gretchen Hollrah, our COO, brought back some information about any kind of seated venues. It looks at things like a way for people to come in via timed entrances and only sit with people they came in with. I’m not sure that’s realistic, how to not be crossing other people’s paths. On the operational side for our industry, it may not be financially possible. If the Buell has 2,800 seats, to sell only a third of the seats … it just doesn’t pencil.

On the theatre company side where it’s our show, there’s more room. You could take a bigger hall and try to make it work that way. But I’m really hoping there’s a vaccine. I go to theatre to be with my people — all those empty rows, that’s not the experience. You don’t go to the theatre to socially distance. It’s such a part of bringing people together. But we are excited to look at events in open-air places like the Levitt Pavilion, the sculpture garden – they open up creative ideas.

OSC: Other large theatres are looking at nothing onstage until 2021. The Guthrie in Minneapolis for example just announced nothing until March. Is that what we’re looking at here?

JS: Right now, we’ve announced probably no shows to the end of the calendar year. The board will reconvene in October. We’ll look at a lot of things, like where is patron behavior, what do people want? And then we’ll look at the finances, projections. What are people going to buy if they’re experiencing economic hardship. We’re part of national arts center consortium doing an eight-month audience polling strategy, so we’ll look at sentiment of audiences across the country over a long time to see when people’s needs, thoughts and desires around theatre change so we can be informed about when to come back up. We’ll see if we can put some shows on after the New Year or after.

OSC: Are there any silver linings, like how are renovations going on the new Wolf theatre (formerly the Stage) and the Ricketson?

JS: Mayor Hancock deemed construction as essential work, so we’re grateful that all that is continuing. Turner Construction is leading the charge, and we’ll be done with the Wolf in the fall and the Ricketson in the spring. It’s just kind of sad we won’t be able to put shows up right away. On the plus side, we don’t have to work around tech rehearsals and things like that.

As an organization we have a responsibility to look at who we are, our strategic planning. Now we’re going to have a new normal, so this year will really afford us the opportunity to think about our business model, our impact, innovation. So hopefully through audience research, it will give us new information about our audiences and who they are and what they need so we can come out of this smarter.

Lisa Mallory is pushing us to think about digital versus paper — like our Applause playbill we hand out. We’re not going to be recycling those like we used to with a whole new awareness about touching things. How can we be more digital, with no paper money exchanges? With security, people don’t want to be touched, they don’t want their stuff touched. How does that change? How do you guarantee to the best of your ability the safety of the patrons? There are a lot of tech advancements we can be looking at. We’ll be looking at food and beverage at the theatre, we need to rethink that. Bathrooms. Behaviors may change, and that’s true for us as well as any live venue like Red Rocks or others.

OSC: What would you like to say to the theatre-loving people of Colorado?

JS: We appreciate the grace the community has shown us as we had to make a lot of cancellations. We hope they come back, and we can’t wait to see you.

Check here for updates on the Denver Center’s response to the COVID-19 pandemic.