Go to most any play or musical in Colorado and you might be amazed by the widely diverse audience of white, black and brown people of all ethnicities, ages and income brackets enjoying our local theater.

I jest, of course. The typical audience around here is predominantly white, with a median age of, I’d guess, about 50. My 17-year-old son comes to a lot of shows with me, and he’s often the youngest person in the crowd, save for some of the bigger shows. And yeah, we’re white.

Colorado, after all, is (sound of Googling) about 81 percent white, and it’s understandable if black teens or Latino millennials aren’t racing to see “Mary Poppins.” That’s not to say there isn’t progress being made. Many theaters are casting more and more black, brown and Asian actors in roles that might previously only been considered for a white actor. And it’s not uncommon to see mixed-race families on stage with never a second thought. It just is.

But there’s certainly more work to be done to break up the sea of gray hair and white faces typical for audiences ‘round these parts.

For Helen Murray, who took over as the executive producer at the Aurora Fox last summer, offering shows that appeal to that city’s more diverse population is part of what she sees as the theater’s mandate. So far, her first season has been a cool mix of the kinds of shows one might not normally associate with a city-owned venue like the Fox.

Next up, she and director Betty Hart are diving head-first into America’s racial tempest with “Hooded or Being Black for Dummies.” The show, by black playwright Tearrance Arvelle Chisholm, is a stark and reportedly hilarious foray into post-Travyon Martin America.

Murray and Hart both warn audience members will be at times uncomfortable during this show, whether they’re black or white.

“It’s a fascinating and unflinching show about what’s happening to our black youth,” Murray says, sipping a water bottle in her office about two weeks from opening night. “Tearrance created something using some very interesting theatrical structures, and he breaks them all over the place. He doesn’t spare anyone — prejudices and misunderstandings, he goes after all of it.”

As the person charged with the artistic direction of the Fox along with the job of filling houses to keep the lights on, Murray is aware “Hooded” may be a bit more of a challenge for the typical Fox crowd. To that end, she said the theater has done outreach into the community to reach new audiences.

“My job is to make art that feeds our community, and I’m interested to see how this kind of show plays here,” she said. “We want to be an open opportunity here at the Fox, and we’re reaching out to the black community, area high schools, community colleges — along with our regular patrons, of course.”

Aside from opening night, Murray says each performance of “Hooded” will include a post-show chat to allow audiences to talk over what they’ve just seen with cast members.

Bringing ‘Hooded’ to the stage

As an experienced director who’s also a black woman, Betty Hart was pretty much exactly what Murray was looking for in a director for “Hooded.” Hart is coming off a breakout year around town, directing “Lady Day at Emerson’s Bar & Grill, (Vintage Theatre and the DCPA’s Garner Galleria Theatre) and acting in a variety of shows from the Colorado Shakespeare Festival to the Colorado Springs Fine Arts Center. She won a True West Award along the way and also joined the board of the Colorado Theatre Guild.

“Hooded” will be her first show at the Fox.

“This is a show that makes me think even as it makes me laugh while it devastates me with the truth,” she says, later offering a concise summary of what the play is about: “It’s a social justice play that deals with Trayvon, and it’s funny. It’s all three.” 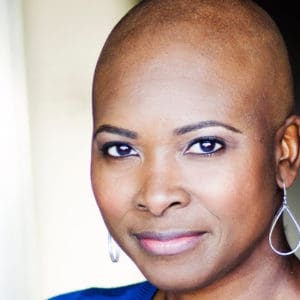 Having just finished the first full run-through of the show when I spoke to her, Hart was a little wiped but eager to dig into what makes this such a compelling show.

“It’s challenging in that we’re telling a story about topics our country can’t deal with,” she says. “How do we grapple with that?”

“Hooded,” she says, is an opportunity for non-blacks to hear and learn what it’s like to be black. She calls it a tragi-comedy and says even the very definition of “blackness” comes into play in the show. And, as the main characters are teenagers, there’s something to learn about today’s youth as well.

The story of “Hooded” revolves around two 14-year-old black boys who meet in a jail cell. Marquis is a bookish kid from the Maryland suburbs while Tru is from the streets of Baltimore. He thinks Marquis has lost his “blackness” and tries to help by writing a manual called, you guessed it, “Being Black for Dummies.”

Underpinning the comedy and satire is the sobering fact that tragedy often lies as the heart of the black experience in 2019 America — particularly if you’re a young black male. To bring that to the stage, Hart says, is a great challenge.

“Our job is to tell it honestly, to make every moment genuine, and the laughs come out of it naturally,” she says. “It’s a nice tightrope to walk.”

Hart says she expects some interesting dynamics to play out once the show is in front of audiences. For blacks, they may be more likely to engage in some of the call-and-response moments built into the play, which might surprise the white folks in the next row. Whites will no doubt learn a thing or two about the black experience, and Hart says there will be places where blacks might laugh while the whites are wondering what the joke is about.

“It comes down to who you affiliate with,” she says. “You can be a person of color who hasn’t experienced some of these issues. There’s no way to know where people will land.”

And that, she says, is the genius of the play.

“He wrote things in there to elicit responses from different groups, black and white, and to see what it’ll be like when some laugh at something and others don’t. It’s not just about color, but about social consciousness.”

While her own identity as a black person informs how she’s approached “Hooded,” she said being a woman adds another element to what she brings to the show as director.

“As a female, I think I have a willingness to live in awkward, tense and emotionally charged spaces,” she says. “We’re raised to be more in touch with our emotions.”

Murray says one of the things that attracted her to “Hooded” is its use of magical realism. Chisholm’s characters range from high school kids to Greek gods, all while starting what she says is an important social and artistic conversation.

Murray says “Hooded” confronts her with her own whiteness, and it’s not always a pleasant feeling.

“Many people think they’re not prejudiced at all, and to sit there and to realize that you do have that in you, it can be difficult,” she says. “Tearrance does it with such a deft hand — it’s like ‘please have this conversation. You’re not bad.’”

Even so, Murray says at the core of what she hopes to inspire at the Fox is the common language of theater for all audiences.

“I want people to understand there’s not a white play or a black play … really what we’re trying to do is program in a way that caters to our community, and focus on shows we think should be shared.”

“Hooded or Being Black for Dummies” opens at the Fox Jan. 18.

The cast of ‘Hooded’