It was one of those weeks where I was getting to enjoy two types of theater: one show where I knew exactly what to expect (Fiddler on the Roof at the Buell) and, a few nights later, one where I had almost no idea what to expect.

It seemed like an ironic sense of timing that the latter, Nirvamlet, kicked off its show just a stone’s throw from where Fiddler was being performed Friday night. And not only nearby: Almost within earshot of where Tevye was warbling “If I Were a Rich Man,” the Band of Toughs band was jamming Nirvana tunes on the fourth level of the DCPA parking structure. Clutching drinks, the audience gathered cautiously along the rails, not knowing the right place to stand.

That was when my son Andy turned to me and said: “What the hell is going on?”

The Band of Toughs band kicked things off on the DCPA parking structure, Level 4.

Indeed. There’s a lot to unpack with Nirvamlet, a mashup of two iconic stories — one old, one a lot newer. The first is all about Hamlet and Ophelia and the circumstances leading up to their deaths. The second is about Nirvana’s Kurt Cobain and his wife, Courtney Love.

Love, of course, is still alive, but Cobain joined the “27 Club” in 1994 when he committed suicide.

Part mystery, part comedy, part tragedy and with rock ‘n roll at the core, Nirvamlet is the damndest thing: a highly enjoyable night of theater that will leave you scratching your head at times but which ultimately delivers in delightfully weird fashion.

For starters, I want to give a huge shout-out to the Band of Toughs, the most excellently named theater company that’s reprised their production of Nirvamlet. The BoTs production staff obviously worked their asses off to put this together. Even on opening night, the many moving parts of Nirvamlet all fit together with only a few hiccups here and there.

And it’s no mean feat. From the deck of the parking structure, the audience was led down the stairs and into the lobby of the Ellie Caulkins Opera House just across the way. We were led by an emcee of sorts (James Brunt), who helped put together some of the pieces. Taking our seats on folding chairs, the story began to unfold. Hamlet (Archie Archuletta), we learn, is somehow the child of Kurt and Courtney (Michael Gunst and Kristin Marie Stelter). Polonius (David Saphier) is a pony-tail sporting record executive. Laertes (Victor Longman) is a doofus pretty boy in tight jeans. Rosencrantz and Guildenstern (Jeremy Carr and Ben Waugh, respectively) are hilarious as a pair of bong-toting party boys.

And Ophelia (a fantastic Liz Kirchmeier), well, she’s a hot mess, as always.

Meanwhile, the three-piece band from the parking structure (Michael Strzepek, Aaron Bustamante and Robert Smith) switched to acoustic instruments and followed the action as we moved from the lobby down into the Ellie’s ground floor (we would make two more moves, ending up in the opera house’s loading bay for the final scene).

The location changes may not be entirely necessary, but they do help break up the action while also giving audience members a respite from the usual theater experience of being jammed in a cramped chair for two hours behind a guy with a head the size of a pumpkin. With Nirvamlet, you’ve got plenty of room to spread out, have a drink and change seats as you move from place to place. 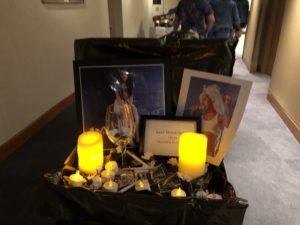 The final move had us pass down a hallway featuring mini shrines to some of those 27 Club members (rockers who died at 27, ranging from Cobain and Amy Winehouse to Jim Morrison, Janis Joplin, Jimi Hendrix and all the way back to blues legend Robert Johnson). It was a nice touch which left me again marveling at the detail behind the show.

(BTW: Shakespeare may never mention the ages of Hamlet and Ophelia, but in Nirvamlet, we can pretty much assume they, too, are 27.)

Along the way, we also meet the employees of a “metaphysical record store” where old vinyl album covers representing dead musicians and other artists slide in regularly, to be sorted by the staff into bins labeled by cause of death: suicide, overdose, natural causes, etc.

All this is going on against actual lines from Hamlet. While it’s hard to take most of the others too seriously, Archuletta and Kirchmeier mostly stay true to the characters: strong actors who could play Hamlet and Ophelia in any straight production of Hamlet. Waif-thin, her entire body an exclamation point of her internal pain, Kirchmeier is riveting — the kind of performer who commands the audience’s entire attention when she’s on stage. Archuletta is also excellent as the brooding Hamlet, with a punk, F-bomb-laced gravitas that adds some grunge-y spin to the original lines.

Together, they serve the foundational storyline while all else goes off the rails. Leading the charge on the more anarchical side is Stelter as Courtney Love — a boozy wreck in a hideous dress and cheap sunglasses crashing through scenes like she just staggered in from the mosh pit. She’s tremendous — a character so annoying you sorta can’t stand her but are eager to see her weird act return in the next scene.

(At intermission, she’s passed out behind the elegant bar in the Ellie’s lower level, while bookended by Ophelia sullenly reading on the other side.)

Kristin Marie Stelter as Courtney Love, sleeping one off during intermission.

Like many portmanteau words, “Nirvamlet” doesn’t exactly fit together, and neither do all the pieces of this show. I know Hamlet and the story of Kurt and Courtney pretty well, but I couldn’t always get the dots to connect. It’s probably best, I’d determined by Act II, not to overthink it too much and just roll with it — like some rando elective on the schedule at Oberlin:

“Hamlet & Ophelia, Kurt & Courtney: Personal self-destruction as evidenced in Elizabethan theater and Seattle grunge.” The course will also focus on the cultural fascination and coincidence behind celebrity death, conspiracy theory surrounding said deaths, and an overall attempt to glue together disparate pieces of Shakespeare with 20th-century rock stars. 3 credits.

If you can picture two sine waves, one representing Hamlet and the other the story of Kurt and Courtney (and other rockers), they at times exist in parallel but just as often veer off as the plots diverge – or have no relations whatsoever.

And that’s OK. By the time we get to the loading bay, the audience is on board with whatever’s happening. Hamlet and Laertes eschewing swords for pistols in their final scene? Fine! There’s an old Toyota with angel wings above it as backdrop? OK!

In a final wonderfully odd flourish, there’s no curtain coming down but, rather, a garage door going up. Suddenly, we were leaving the world of Nirvamlet and being thrust out into the Denver streets, the light rail just a few steps away.

Hamlet, of course, has been done six ways from Sunday, with theater companies taking full liberty in the retelling of the story in a variety of ways. Nirvamlet is a worthy addition to this legacy, a curious overlay of stories separated by centuries but nevertheless united in tales of the tragically hip. The cast is superb — a group of actors who look like they’re having such a good time that it’s impossible not to enjoy the ride.