The first thing I thought when looking to take my 5-year-old granddaughter to see this production of Hansel & Gretel was something along the lines of: “Hmmm … not sure all that stuff about a cannibal witch is appropriate for her age.” I reached out to the theatre and they assured me this adaptation by Alaina Beth Reel (who also directed) was pretty tame.

And while there are some concerns about being fattened up for dinner by the weird witchy woman in the woods on the part of Hansel and Gretel, it turns out in the end she’s just kinda lonely and eager to share her bounteous supplies of candy. 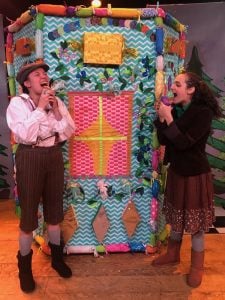 Reel’s adaptation of the Brothers Grimm story from 1812 swaps out the evil stepmother for a kindly but fiscally concerned aunt (Colleen Lee) who, along with the father (Damon Guerrasio) is on edge over the family’s finances. Headstrong Gretel (Rachel Moore) overhears part of a conversation and concludes that the two are planning to somehow ditch her and Hansel to save money, so they run away from home and head into the woods.

Hansel is played by Rhianna DeVries, who portrays the younger brother as a word nerd who takes every opportunity to display his command of English. In the woods, they meet a wacky white bird (also Guerrasio) who eats their breadcrumb trail but also gets a bunch of the kids in the audience onstage for some fun. When they do meet the witch (Lee), she’s more like a nutty recluse with a candy house than an evil witch – but she does try to keep the kids from leaving which, while technically kidnapping, is forgiven in the end.

At the top of the show, Moore addresses the kids in the audience and assigns roles by section. Some of the kids were hooting owls waving their arms, others were buzzing bees and a third section did howling wolves. And in the end, most of the kids crowded onto the stage to help put the witch’s house back in order. These are fun interactions that most of the kids enjoyed participating in (my granddaughter was happy to watch).

At about an hour, this production is perfect for younger kids who might struggle to sit through a longer show. The production is homey and well-done, with hand-painted set pieces and a flexible design by Gail Smith. Costumes by Liz Scott-McKean are cute and fun, particularly the white bird’s feathers and the witch’s bright hair and dress.

The interactivity is what really makes this show a treat for kids. Of course, once you open things up for kids to yell stuff out, some of them have a hard time turning it off. But this is a strong cast of adult actors who managed the chaos well.

In the end, happily-ever-after arrives in a particularly American way: Gretel comes up with an idea to save the family from having to move into the city by monetizing the witch’s house as a sort of candy get-away. The Brothers Grimm may not have imagined such a capitalist remake of their original story, but it’s a perfect ending that I think even the youngest in the audience understood well.