Candlelight delivers a stirring production of ‘The Hunchback of Notre Dame’

At Johnstown’s Candlelight Dinner Playhouse, get ready for gypsies and jesters and soldiers and statues and a minister and his congregation — all properly adorned to take us back to a time when gypsies roamed Europe and a deformed hunchback was hidden away in a cathedral.

The Hunchback of Notre Dame is a musical retelling of the classic novel by French author Victor Hugo. It incorporates music from the Disney film of the same name. Like most Candlelight productions, it’s a full-blown extravaganza, with an elaborate set that depicts an ornate bell tower complete with an intricate stained-glass background that changes colors with the mood and scenes of the musical. 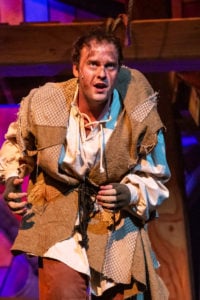 Three functioning bells hang from the ceiling for the hunchback Quasimodo to ring (the cause of his hearing loss). Along the sides of the stage are carefully detailed church balconies where the choir sits and sings — adding deeply to the fullness of the performance. Indeed, there were times I was in awe of the resonant music echoing from all areas of the theater.

The biggest and most lively musical number is “Topsy Turvy,” s beautifully choreographed by Heather McClain and performed by the cast of gypsies. Topsy Turvy Day happens to be Quasimodo’s first day ever out of his sanctuary in the bell tower of Notre Dame where his uncle, Dom Claude Frollo, (David Wygant) has kept him hidden away because of his terrible deformity. It’s the one day a year gypsies can dance, and Quasimodo escapes his prison to watch as Esmerelda, a beautiful gypsy, provocatively dances.

But Quasimodo is not the only one beguiled by the haunting Esmerelda. Phoebus (Scott Hurst), charged with defending the cathedral, as well as Frollo become captivated with her, too. What ensues is the terrible tragedy that is The Hunchback of Notre Dame.

Along with the choir, several cast members played different roles, be it those of the gypsies, those of the faithful, and often frightening congregation, or those of the statues from which Quasimodo takes solace and advice.

Esmerelda, a petite, dark-haired beauty played by Sarah Grover, delighted onlookers (as well as Quasimodo, Phoebus and Frollo) as she skillfully danced on a tiny raised stage. Quasimodo (Lee Knowles) was endearing and kind, instantly receiving the sympathies of the audience. At times he is mute and dumb when in the company of his master, Frollo, other times wise and thoughtful among his friends, the statues. 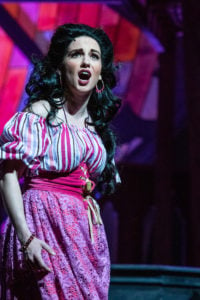 Quasimodo quickly and effortlessly becomes the hero as he attempts to save Esmerelda from the witch hunt initiated by Frollo in an effort to conceal his desire and lust for her.

When Quasimodo and Phoebus join forces to find their beloved Esmerelda and defeat Frollo, the audience is taken on an adventure to find the Court of Miracles where they believe Esmerelda to be hiding. But they are not the only ones on to her hiding spot, and the duo arrives to find Frollo has beaten them there.

This is a somewhat dark but lively show that’s suitable for families. I was pleased to finally get to see such a nicely made musical of the story. With no comic relief, this show is indeed all tragedy, but not without moral lessons to offer. We watch on as Esmerelda, unlike the other gypsies, accepts Quasimodo, deformities and all, reminding us that kindness rules above all.

What: The Hunchback of Notre Dame
Where: Candlelight Dinner Playhouse
When: Through Nov. 17

About the Author: Kari Redmond

Kari Redmond is an online ESL teacher trainer and writer located in Fort Collins, Colorado. She writes novels, short stories, poetry, flash fiction and essays. When she is not writing she is traveling the world (pre covid), tending to her 75 houseplants, going to live music and generally loving life. www.kariredmondwrites.com/ www.twitter.com/karirwrites www.instagram.com/kariredmond