Skip to content
Home/Posts/Reviews/In ‘Curious Incident,’ a triumphant piece of theater gets everything right
Previous Next

In ‘Curious Incident,’ a triumphant piece of theater gets everything right

In one of the most striking scenes of the Boulder Ensemble Theatre Company’s new production of The Curious Incident of the Dog in the Night-Time, the teenaged protagonist Christopher is making his way through a British train station when we hear all of his cascading thoughts simultaneously. They range from the multitudinous advertisements seeming to scream at him from shop signs and posters to the train announcements, conversations and the astounding mix of sensory input that comes from being in a busy station.

Most of us are able to process all of this by blocking out the bulk of it. But Christopher, as he says at one point in the play, sees everything, hears everything. Most everyone else, he opines, is rather stupid at ignoring all of the interesting things whizzing by in life. His super powers of observation, which also include a genius-level ability to decipher complex math problems, is also his greatest weakness. Sensory overload can reduce him to moaning in the fetal position as those around him are largely helpless to help him.

While it would seem clear to most that Christopher has some form of autism, no particular term is affixed to his condition in the script. Rather, we simply see a brilliant and deep-thinking young man — played with humor, compassion and authenticity by CU-Boulder junior Alex Rosenthal — trying to make sense of his parents’ split, the brutal killing of a neighbor’s dog and the annoying sense that everyone around him is a clueless dummy.

This is a hell of a show, an enormously well-done production by BETC that features an extraordinary cast with a compelling story based on the best-selling novel of the same name and adapted for stage by Simon Stephens. Director Stephen Weitz hit the jackpot on the casting side, finding not only the perfect Christopher in Rosenthal but in the parents as well. Michael Morgan as Christopher’s father, Ed, hits it out of the park as a loving parent at his wit’s end caring for his son while also coping with his failed marriage and his own violent tendencies. Juggling all of that is a challenging acting job, and Morgan pulls it off with a bravura performance.

As his wife, Judy, Karen LaMoureaux is also at the top of her game as the cheating wife who’s been excommunicated from Ed and Christopher’s life and who we don’t meet until well into the play. Wearing the mantle of shame she feels she deserves for running off with Roger (a delightfully oleaginous Sam Gilstrap), she regains some moral ground when Christopher, freaked out by events at his father’s home, miraculously finds his way to London via train and appears at her flat.

How did Ed let him do such a thing? What’s all this about a dog Ed killed? And what in hell was he thinking telling Christopher she was dead for the past 18 months? 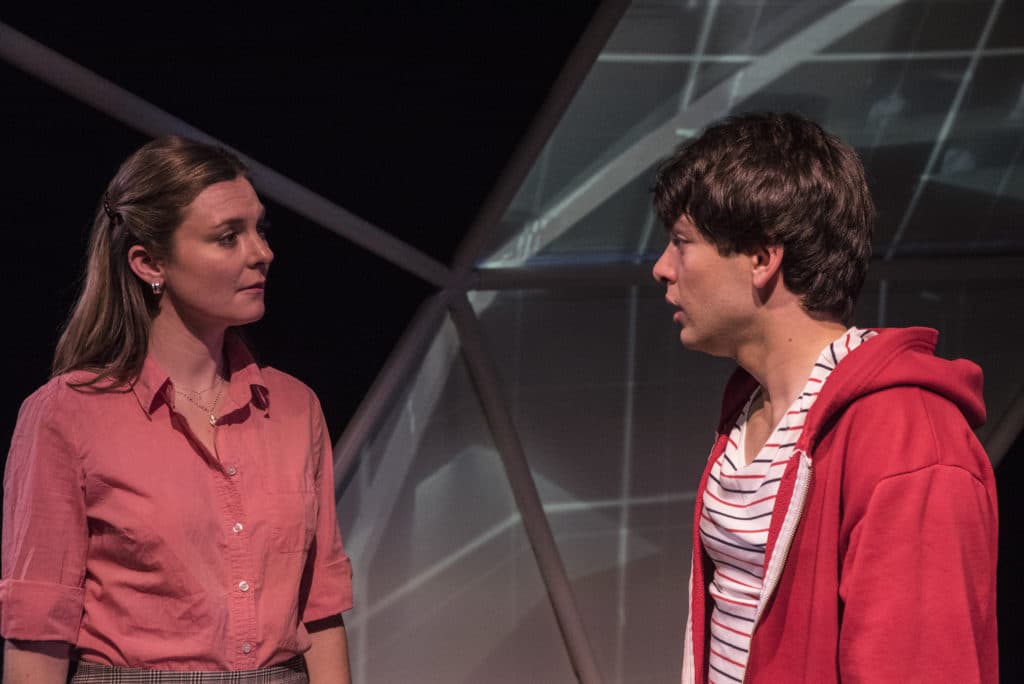 A lot of threads

While Curious is mostly Christopher’s story, the domestic rubble at the heart of it drives much of the action. It’d be messy and upsetting in the best of circumstances, but someone like Christopher craves regularity and things being just so: He does not do turmoil well. The show opens on him over the body of a dog killed by a garden tool and its owner (and Roger’s ex) Mrs. Shears standing over it. Determined to find the killer, Christopher puts on his detective hat and gets into one mess after another with his ultra-direct approach to solving problems. That all of his answers ultimately lead back to bad choices on the part of his parents (mostly those of Ed) turns his reality upside-down at the same time it compels Ed and Judy to do some serious behavior modification.

Curious approaches the presentation of all this through plenty of dialogue, but it also employs some other clever storytelling tools. Several members of the ensemble cast play a variety of roles, while also managing the rearranging of the set pieces. While this kind of thing is typically handled in the dark with the actors shifting into crew mode, Weitz has them as more integral to the action and also charged them with well-choreographed movements of the sole set pieces: a half-dozen or so equilateral triangles that created everything from beds and chairs to train platforms and luggage racks.

Rather than simply pick them up and stick them where they need to go, the ensemble members carefully mirrored one another and, with eye contact, deftly moved them into place with coordinated precision. I saw the show on opening night, and they appeared to nail all of it — an impressive feat no doubt rehearsed exhaustively.

The other major component of this production is the set itself, a sort of half geodesic dome that encompasses all of the action while also containing projection surfaces within the hexagonal shapes. Kudos here go to set designer Tina Anderson for creating a space that, while highly functional, also mirrored Christopher’s ordered mind in its shape while enabling the projections of the many things that intrude upon that order. It’s really something special.

This is rather a long play — over two hours — but it moves along apace with Christopher’s busy mind. Helping all of that happen is the group of A players Weitz assembled to portray characters who move in and out of Christopher’s field of vision. Billie McBride plays an elderly neighbor who does her damndest to befriend Christopher but is constantly rebuffed. Sean Michael Cummings has a recurring role as the British bobby trying help sort things out, while MacKenzie Beyer plays Mrs. Shears along with the headmistress at Christopher’s school. Warren Sh