Miners Alley crushes it with ‘Once’

The simple truth is this is an astonishingly good show everyone should go see.

Set in Dublin in modern-day, Once is a musical with a seeming romance at the center but, in fact, is more of a clarion call to getting one’s ass in gear. If the singer-songwriter, in this case, is unwilling or unable to engage the ass gear, then an ass-kicking muse is required.

In Once, this role is played by an incandescent Carmen Vreeman Shedd (Girl), a single mom and force of nature from the Czech Republic who hears a street musician perform a great song to, he thinks, no one. In disgust, he leaves his battered guitar on the curb and walks away.

Girl is having none of this defeatist bullshit, and despite the fact that she doesn’t know Guy from Adam, she gets up in his grill and changes his life simply by believing in him and his music.

Guy (real names are, for some reason, in short supply in this script) is perfectly played by John Hauser, who gets just right the artist’s cursed persona of talent, hope and despair all rolled into one. Shedd plays his muse with the charming authenticity of a groupie powered up by her own skills accompanying him with her voice and piano.

The two leads are both equally charming, their elaborate romantic dance around one another coming across entirely genuine and heartfelt. That their brief dalliance doesn’t end up in the place one might expect matters much less than the powerful effect they manage to have on each other — and those around them — over the course of just a few days. 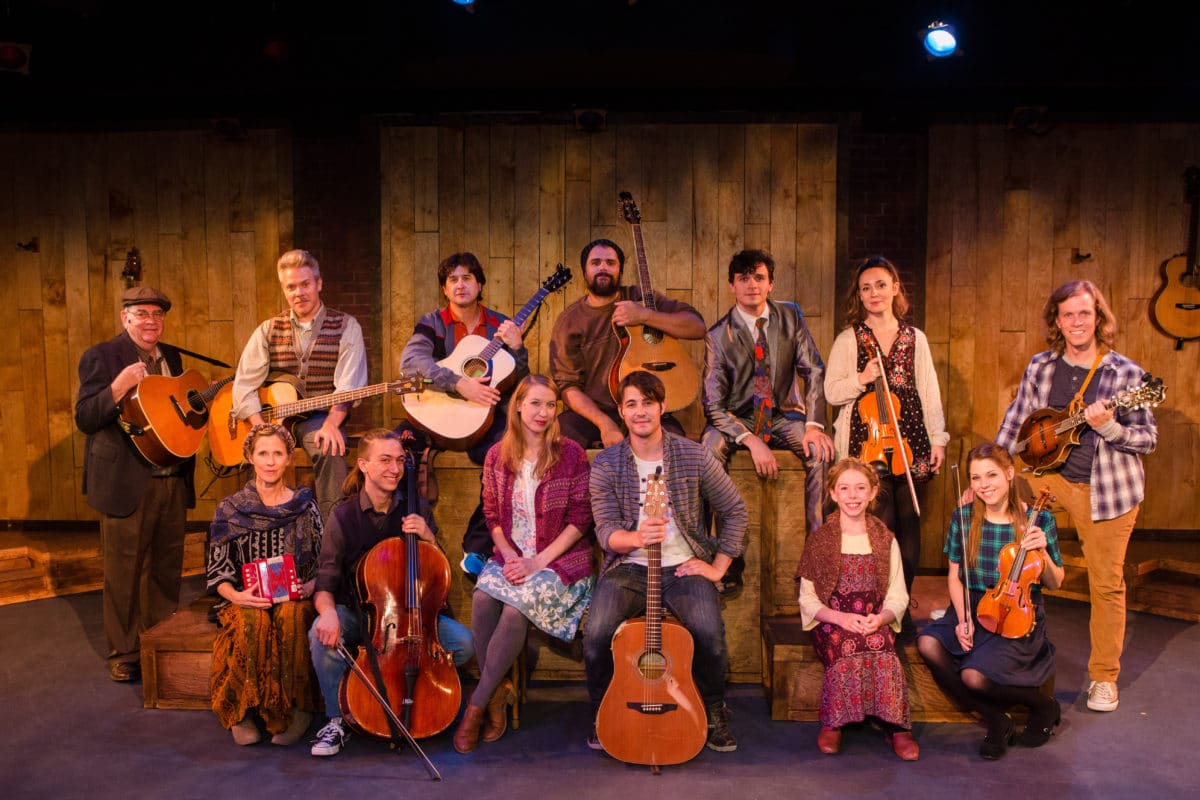 Director Len Matheo and musical director Davie Nehls hit the casting jackpot when they put this one together, assembling a stellar lineup of excellent local actors who can also all sing and play an instrument.

That’s important, for Once is not your typical musical with an orchestra in the pit or a band off-left. The music is all performed, I dunno, au naturale by whoever happens to be on stage or otherwise handy in the wings, in the aisle, wherever. It’s a lovely way to go about it, somehow making the artificial construct of the musical more organic and realistic. And, since most of the songs are part of Guy’s songbook, the additional musicians jumping in when needed just seems like the right thing to do.

In this idealized part of Dublin, everyone’s a musician, and music is the dialect of the story.

Some say a show is only as strong as its weakest character, with the corollary to that being that the best shows are the ones where everyone on stage is great. That’s the case with this production of Once, where all the characters are played by actors who’ve explored their roles and mined them (no doubt with Matheo’s help) for everything they’re worth.

Exhibit A is Joel Abelson, who plays Billy, the music-store owner who allows Girl to play the piano since she can’t afford one of her own. An Army veteran now a theatre grad student at CU, Abelson is a tall, bear of a guy who plays Billy as a grumpy, stingy bastard with a thousand odd personality quirks. He’s just tremendous, bringing so much weird shit to the role that he runs away with some of the scenes.

Exhibit B is another scene stealer, Aaron Vega as the Bank Manager. Vega is priceless, and the scene where he pulls a guitar off the wall and tries to impress Guy and Girl with his own caterwauling Irish folk song is worth the price of admission. That his character goes on to join the band and spar with Billy non-stop is just another delightful element in a play that just keeps delivering from a grab-bag of unexpected moments.

Another source of curious characters comes from Girl’s home, including her wacky mother Baruska (Ellen Orloff Gauthier) and two other Czechs — Andrej (Parker Fowler) and Svec (Damon Guerrasio). Andrej is a frustrated and occasionally furious “burger boy” trying to improve his lot with a better job, but even his shiny suit isn’t enough to get the gig at first. No matter, he can still sing and play guitar with the best of them.

Svec is a heavy-metal drummer who has to learn to tone things down for Guy’s music. Guerrasio plays him as the kind of wild-and-crazy guy we all need in a good drummer, but with a winning smile and a sweet nature that made him one of my favorite characters.

David Miller spends most of the show playing mandolin but steps into the role of Eamon the recording studio guy and does a nice job filling out the character in a short span of time.

Rounding out the cast are two impressive violinists (Katie Jackson and Allegra Ludwig Michael) who play some small parts but are omnipresent with their strings throughout the show. Joining them with the portable cello is Nelson Walker, who also plays the snarky emcee at the open-mic club where Guy shows his stuff. Morgan Murphy plays Girl’s daughter Ivonka while also showing her chops on the banjo.

Once is based on a 2007 film of the same name, and the 2012 Broadway production won eight Tony Awards, including Best Musical. With music and lyrics by Glen Hansard and Markéta Irglová alongside John Carney’s script, it really is a unique piece of work that’s a lot of fun to see. At Miners Alley, audiences have the opportunity to see Broadway-quality work in an intimate setting with the actors just a few feet away.

Adding to the overall laid-back vibe, some of the musicians occasionally do an impromptu jam session before the show starts, so get to the theater early to check that out.

OK, so my short review didn’t really work out. But it’s hard not to go on a bit about what’s one of the best shows mounted in Colorado so far this year.