Nefarious doings inside a NYC freak show as The Phantom returns

‘Love Never Dies’ picks up where ‘Phantom’ left off

It’s got to be exhausting being The Phantom of the Opera. You spend all of your waking hours either pining for Christine or composing music for her she may never perform. To give voice to your misery, you have to sing at the top of your lungs, all while darting around complex sets trying not to let your flying cloak catch on anything.

These were some of the thoughts I was having while watching “Love Never Dies,” the sequel to “The Phantom of the Opera.” After seven annual pilgrimages to Denver in the original story, the Phantom is back to, um, delight audiences with a new chapter which, like most sequels, isn’t quite as good as the first. 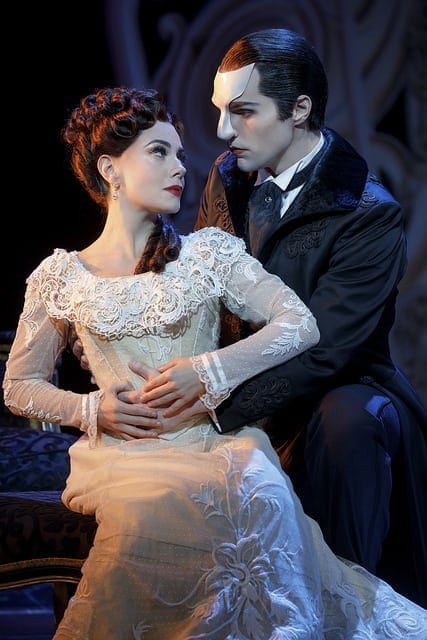 What: ‘Love Never Dies,’ a sequel to “The Phantom of the Opera”

Not that I was a huge fan of the original “Phantom,” with its overwrought emotions and doomed-from-the-start romance — but I understood the romantic appeal and the intriguing backstory. Plus, there were some fairly memorable songs, which this new one seems to lack (save for some reprises from the original).

So after 10 long Christine-less years, where are we? The Phantom (Bronson Norris Murphy) is part of a freak show in Coney Island, although I wasn’t clear what his job is — apart from brooding and scheming. The cast of colorful characters at “The Phantasma” offers some reprieve from The Phantom’s foul moods, although a psychologist would probably chide them for enabling his darker impulses. When he learns Christine is coming to New York on an offer from Oscar Hammerstein to be part of his new theater, they assist when he cooks up a plan to lure her into his world once again.

After all, women just love when you show your affection for them by duping them into some sort of trap, right? Ah, but The Phantom, despite her initial angry rebuff, has charms beneath the mask that women — or Christine at least — just can’t ignore.

Accompanying Christine (Meghan Picerno) when she gets off the boat is her husband, Raoul (Sean Thompson) and their 10-year-old son, played alternately by Christian Harmston or Jake Heston Miller. Bogged down with gambling debts and hopeful that Christine’s new gig can help dig him out, Raoul is hopeful a new start in the Big Apple. But when they all get waylaid to freakville, he’s also ready to make a deal with The Phantom if that’s what it takes.

Even if the plot is rather thin, this is still an Andrew Lloyd Webber musical and thus a top-shelf production. Backed by a strong and versatile pit orchestra, Murphy and Picerno have plenty of big numbers to belt out, and they deliver on that score. Both of them deliver a couple of stunners that wowed the packed house on opening night, with Picerno in particular able to hit and hold notes one could scarcely imagine possible. Meanwhile, Mary Michael Patterson as Meg holds her own, particular in the lighter bits — her “Bathing Beauty” number is a hoot.

“Love Never Dies” is an enormous production with fantastic sets that, despite their size, move effortlessly on and off stage as the action moves from place to place. If you liked the original “Phantom” well enough, you’ll almost certainly enjoy this one. Just don’t expect the suspense of the original, as the Phantom in this show is less an unseen presence and more out in the open as a flawed individual who, like most of us, is ever hopeful that things might get better.