One woman, 30 characters and a very famous theme park

All alone on stage, for an entire show — for some actors it sounds terrifying. For Tia Shearer, it’s her happy place.

The DC-based actress is taking up a short residence in Colorado and getting the Aurora Fox to blow the cobwebs out of its black-box Studio Theater this month for “The Happiest Place on Earth.” The show by Philip Dawkins is based on the playwright’s early memories going to Disneyland every Christmas — a tradition begun a generation earlier following the death of his grandfather. When others expressed interest in doing the show he’d only performed as himself, he made a few tweaks and opened it up for performers like Shearer.

If that sounds familiar to Fox fans, it’s because that’s where current executive director Helen R. Murray came from.

Connection made, Shearer will do the performance at the Fox starting March 8 and running through March 24.

“I just love this show,” Shearer said. “It’s such a unique theater experience.”

Along with the challenge of the one-woman show, Shearer also gets to stretch her acting muscles by playing over 30 different parts. Although originally Dawkins’s story, Shearer said she tells it as if it’s hers.

Along with the multitudinous characters, the scene is also set with projections with an otherwise spare set.

It might sound like a show titled “The Happiest Place on Earth” is out to poke holes in the Disney bubble, but Shearer said it’s not that kind of thing. 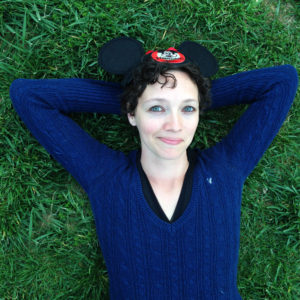 Ears and all: Tia Shearer

“It’s a pretty objective look at Disneyland and some things are less than savory,” she said. “But there’s also clearly a lot of love in it. Dawkins treats it the way you’d treat anything you love — seeing the faults as well as the good.”

An Equity actor, Shearer said she’s leaned into smaller-cast productions in recent years and has found she really enjoys it. Doing one-woman shows is the ultimate expression of her shrinking-cast bent.

“I love it, especially the multiple-character roles,” she said. “I’m a very physical actor, and I hadn’t even really realized it until someone pointed it out to me. But I discovered it works really well with a piece where you have to be multiple people. I do a very physical version of acting, and it helps make the characters more discernible from one another when you’ve got little or no costume changes.”

Switching characters is more than just using a different voice or attitude. The physical part of it, Shearer said, is in finding the unique tics that help portray a persona.

“I love the challenge, moving and finding these tiny shifts in your body and your posture that can make you a whole other person.”

As he did in the initial performance a few years back, Shearer’s husband, Matt Bassett, directed her in this one.

“It’s great,” she laughed. “We don’t have to be polite — but it’s always gracious and respectful and we have this great shorthand with each other. I never feel like just an actor when my husband’s directing me, it’s more like a collaboration.”

Despite the root of the play’s story being a tragic death, Shearer said “The Happiest Place on Earth” touches a range of emotions.

“It’s a real mix. There are some sad moments, but Dawkins’s plays are always so filled with humor, and so much hope,” she said. “There’s the gratitude of exploring these memories and also a feeling of wonder.”

She said the play often inspires audience members to tell her after the show about their own Disney memories.

“I love a play that can do that kind of a thing for people when they see it,” she said.

What: ‘The Happiest Place on Earth’
When: Through March 24
Where: Aurora Fox
Tickets & Info