Skip to content
Home/Posts/Theater news/Puzzling over Pinter, and is it ‘theater’ or ‘theatre?’
Previous Next

Puzzling over Pinter, and is it ‘theater’ or ‘theatre?’

Far from the carefree ‘Mamma Mia!’-strewn days of summer, we’re into the winter season when many theaters get more serious. This is on vivid display at the Curious Theatre, with its production of ‘Gloria.’ (Read my review here.) The play deals in some seriously serious themes, but manages to inject a good many laughs as well. And, as usual, the production at the Curious is topnotch.

(One audience note: If you have a chance to sit in the first few rows, don’t. The first act has some sight-line issues with the office cubes and chairs.)

I’ve seen a lot of theater in my life, but I have some gaps in some of the more literary areas. I’ve never seen a Chekhov play (or read one, for that matter), and until last weekend I’d never seen a Harold Pinter play.

Germinal Stage gave me the opportunity to see two Pinter one-acts — “The Room” and “The Collection” under the title “The Pinter Plays.” Since I was seeing them as a Henry judge, I can’t weigh in on the merits of the production but the plays themselves, I have to say, were tremendously puzzling.

In a weird way. My son and I talked about them most of the way home from the John Hand Theatre and we weren’t able to reach any satisfying conclusions about what we’d just seen. Most of that kind of talk typically focuses around plot, and our need to walk away from any entertainment feeling we understood what happened. 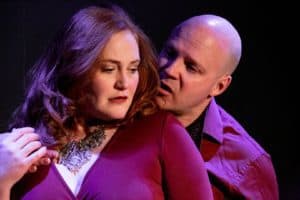 This clearly wasn’t Pinter’s intention. The language he employs is fascinating, the spaces, the repetition — it’s like nothing I’d ever seen.

Fortunately, people puzzled by Pinter can attend a Symposium for The Pinter Plays, a free event at the John Hand set for noon, Feb. 2. Meet the cast, discuss the production and see if you can get to the bottom of who the hell the guy is in the basement! And if you’re still Pinterested (sorry), ‘Betrayal’ by Pinter runs Jan. 11-Feb. 17.

More serious-as-a-heart attack shows coming up include “The Diary of Ann Frank” at Arvada Center and “Anna Karenina” at Denver Center.

On a sad note, an icon from my childhood, Carol Channing, passed away Jan. 15 at 97. (Here’s the Times obit.) My mom and my grandmother both loved “Hello, Dolly,” and it was commonly featured in the stack of LPs my mom would tee up on the ol’ record player of a Sunday morning.

On a highly related note, “Hello, Dolly” is in revival mode right now, with a touring production coming through the Denver Center in March featuring Betty Buckley in the title role.

One of the things people have told me they like about the OnStage Colorado site is that it offers a lot of options for finding shows. You can view calendars by region, genre or see all shows by date. You can search by city, venue, categories and tags. And you can see the listings in calendar view or as a day or month list.

One other thing you might find handy is the big list of Colorado theaters under the Resources tab. I can’t say every single theater and venue in the entire state is in here, but it’s pretty close. (Email us if you see something missing.)

This list is broken out into Venues, which typically means theaters that have their own space, and Companies & Organizations, which lists theater companies that perform in another space.

If you just want to poke around and see who’s doing what and what’s next, check out this big list of theaters. If they have anything coming up that’s in our calendar, it’ll be shown on the theater’s page. For theaters, it’s a great place to check to see which of your shows are listed on our calendar and to ensure all the listings are correct.

With the True West Awards behind us, we now have another set of awards coming from the Marlowe’s Musings theater blog. I didn’t see everything on there, but I generally found myself nodding with the selections I knew about. Kudos to David Marlowe for taking the time to recognize all of this theater excellence from the previous year. We can never give enough props to the Colorado theater folks who work their tails off to bring us great theater.

One of things that drives me nuts doing this site is the whole “theater/theatre” thing. While it seems 95 percent of the theater in the state use the British/fancy spelling, theatre, a few don’t. I’m a dyed-in-the-wool user of Associated Press style, which comes down firmly with “theater,” so I only use the American spelling unless it’s the name of the theater.

That mostly keeps it straight, although it can look a little odd when the word “theater” appears adjacent to the name of a “theatre.”

I was reminded of this from a Facebook post from the Colorado Theatre Guild linking to a story in American Theatre about the discrepancy. The upshot seemed to be that people use “theatre” to sound a little fancier, but that ultimately it doesn’t make much difference — it’s all theatre, er, theater!

See you at the theater!