Over two February weekends, the Colorado theater community got a look at potential future works during the 2019 Colorado New Play Summit. This year’s event featured four new plays and one musical, all of which were attended by full or nearly full houses and enthusiastic responses from the audience.

Here’s a roundup of the shows, along with portions of interviews I was able to conduct with several of the playwrights. (Note: Since these are works in progress, organizers ask that they not be reviewed, so I’ll stick to the basics and what the playwrights said.)

This year’s big event featured former Lumineers singer and cellist Neyla Pakarek’s musical take on the real-life story of one Kate Slaughterback. It was nearly 100 years ago when Kate and her young son were set upon by a crap-ton of rattlesnakes near Greeley. After shooting as many as she could and running out of ammo, she picked up a no-trespassing side and whacked the rest of them — some 200 in all. 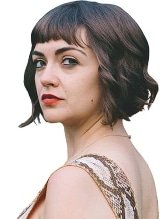 It’s hard to imagine that many rattlers attacking at once, but Kate had pretty good backup for her story — including a dress made completely of rattlesnake skins.

It’s a wild story that’s apparently fascinated Pakarek. She teamed with Karen Hartman who wrote the book and the musical was presented as an early draft — with a full band backing up a strong cast reading from scripts. Kate is played at different stages of her life by three actresses, while a “Leader” (Pakarek) offers commentary, sings some of the songs and, of course, plays cello.

“Rattlesnake Kate” was performed before an enthusiastic, capacity crowd in the Seawell ballroom at the Denver Center. It’ll be interesting to see where this one goes, but with the strong Colorado connection, it’s probably safe to say it’ll be a local favorite if and when it gets to a full production.

Lots more on this show in the DCPA Newsroom.

This comedy centers around the back-room politics of a Walmart-like store in Texas. The cast is comprised mostly of assistant managers and led by co-manager Andy, a no-nonsense but often clueless taskmaster with deep and complicated connections to her staff. The other co-manager, Courtney, has recently departed, leaving the whole crew in a chaotic bind on Christmas Eve.

Gómez said the story is modeled after his mother’s experience working for several decades at an El Paso Walmart. The Denver Center reading is the culmination of the play’s third developmental workshop, and Gómez says he’s ready to see it staged. 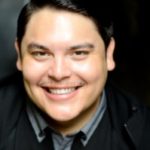 “The piece is epic with a lot of physical comedy, so I’m eager to see it on its feet,” he said.

So if his mother is found in the character of Andy, where does he fit in?

“I’m in everyone. My way in for a lot of my … characters is to find where I am in them, and then they evolve. When based on real people, my access point is what about them do I feel closely connected to because of who I am, and from there fiction blossoms.”

The experience in Denver, Gómez said, has helped move the play along beyond the solitude of the keyboard.

“I really thrive in collaborative environments. Being with actors and audiences, I feel like I have a lot more to pull from. So now it’s about ‘how can we make this thing its best possible vision or form’ without compromising my artistic integrity.

In the Upper Room

This autobiographical dramedy is part of a cycle of plays in various stages of completion by Omaha-based playwright Beau Berry. “In the Upper Room” is the story of a multi-generational family in Omaha that’s based on her own ancestors (this chapter is set in the 1970s). At the center is the elderly Rose, a domineering matriarch living with her son’s family and driving everyone crazy.

While the show has a lot of laughs, it’s also got some dark turns and even a bit of magic. The juxtaposition of the grandparents on one end, a pair of teenage girls on the other and the parents and a few batty aunts in the middle proved fertile ground for Berry’s script.

“Every character is directly related to me,” Berry told me, noting that some were ones she knew while others had passed before she was born. “A lot of the stories are ones passed down through the family.”

She said all of the plays will stand on their own, but it’ll no doubt be interesting to see how the characters appear at different times of their lives. One character in “In the Upper Room” is a missing son named Terry. While never seen, he’s frequently alluded to and Berry says he’ll have his own play. The mother in this show, Jan, appears in another play as a grandmother, with Berry’s own younger self as another character.

A good deal of the comedy in “In the Upper Room” comes from the salty, black family dialogue Berry said just comes naturally.

“Anytime you hear people talking a certain way growing up, those voices just stick with you,” she said. “Bringing them back to life was so fun, amazing and exciting. They just want to be heard.”

Berry said her experience in Denver was overwhelmingly positive.

“I’m just basking in gratitude for the hard work put in by the actors, the crew. I just love the play; it truly resonates with me.

Berry shared my appreciation for the outstanding cast that workshopped the play over the course of two weeks and performed the reading.

“I love this cast so much, and we’ve really made a family backstage. I want to take them everywhere. It’s just been a dream.”

We’re so bogged down in the immigration politics of 2019 that it’s hard to even imagine where all this is going. Thankfully, playwright Tony Meneses has some ideas: His funny, searing look at Texas in 2050 centers around a campaign for Congress being run by an Hispanic American named Andres Salazar.

Or is it “Andy?” The main character isn’t sure how much of his heritage to deploy in the race, taking place as it is in a world where the wall was built and those of Latin American descent left on the north side have assimilated — like the Irish and Italians did generations ago. 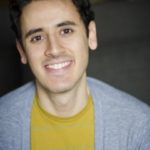 It’s a tricky tight rope, complicated by the unwelcome and unexpected arrival of a young Mexican man who made it under the wall and is on the run. In post-wall world, harboring such a fugitive is highly illegal, and not the greatest campaign story.

Originally from Guadalajara, Mexico, Menenes grew up in Albuquerque and said “twenty50” is a cautionary tale about racism and assimilation.

“Will it happen to my community?” he asked. “I feel like we’re already watching that transition happening, and for me it’s calling it out before it gets worse, hopefully, and in a way only a play or art can do.”

Menenes said Trump’s national emergency was declared while they were in rehearsal, adding a real and timely spin to his story.

“It was so bizarre to be in rehearsal (during that). “The play just felt different by the day, depending on what was in the headlines.”

Comparing Irish and Italian assimilation to what might happen to Latino communities, Menenes addressed whether that kind of result is good or bad.

“We hear the points of view from different people in the play. Sebastian (Andy’s campaign manager) has embraced it and chosen to assimilate. Irene (Andy’s mother) remembers the past and tries to hold onto culture and history. That argument happens with every immigrant community when they come into a different place. They have to make a choice about how much they embrace the culture around them.”

In America, though, looming in the background are darker forces.

“The political part of the play is that white supremacy is inevitable in this country, and what it does to preserve itself. Like allowing others to join their group and become whites. It’s in our history books and I think it’ll continue to happen, unfortunately, and it hurts.

Acknowledging that every country has some variety of racism and power dynamics around it, Menenes’s noted nonetheless that America was built on the institution of slavery.

“When I got here from Mexico I was like, ‘This country has a race problem.’ Yet everyone here is an immigrant. So it’s that selective reasoning, that exceptionalism.”

And, he said, it’s not confined to whites.

“Even in our communities, we had people who supported Trump, and they say ‘because we came here the right way.’ It’s a very complicated argument, but fruitful to mine all these different points of view of where the country is and where it’s heading.”

Workshopping the play and seeing the two readings in Denver helped him see where parts of the play were working.

“Hearing a reading, it’s always scary. It never gets easy. It does affirm where the humorous parts are, but also where the non-humorous parts are, areas of stillness. It was encouraging, about where it is now, and I’m looking forward to using the responses to make the play stronger.”

With the warm reception and partial standing-O the reading received, Menenes said he was able to relax a bit.