‘Sanctions’ looks at the sordid underbelly of college football

At the Curious Theatre, a solid production doesn’t break much new ground

In this golden age of scandal we’re living in, another news item about sketchy or even criminal behavior in a college athletic program may barely raises an eyebrow. But that doesn’t mean they’re not still wrong and worthy of discussion, and this is where Bruce Graham’s play Sanctions dwells.

In the back offices of a fictional college somewhere in America, the delicate balance between a football player’s performance on and off the field is hashed out, often with quite a bit of yelling. Claire (Dee Covington) is in charge of the tutoring program at the school, where the Cats are already under sanction by the NCAA for past naughtiness. Aware that the school is “under the microscope” and trying to stay clean to get the sanctions lifted by next season, Claire finds herself caught in the middle when two players are accused of sexual assault.

As director of football operations, Ronald (Thony Mena) tries to get her to sweep it under the rug, but Claire has had enough. The victim was one of her tutors, a naïve young woman named Abby (Adeline Mann) who doesn’t know a first down from a touchdown but who’s eager to help the star quarterback Demarius with his dyslexia. She makes the mistake of visiting the players’ dorm where the assault takes place. It’s not rape, but it’s bad enough that Claire thinks both players should be tossed off the team.

Ronald dismisses the other player with a “snip, he’s gone” comment — he’s not a great player to start with. Demarius is another story — a talented QB whose on-field performance could mean millions in revenue for the school hobbled by sanctions. Claire points out the huge double standard, but she’s got another problem: Abby isn’t interested in pressing charges. She just wants to move on, and she’s worried about harming the lives and careers of the players.

Sanctions has a lot to say about this kind of bad behavior, and most of it is based on real-world events at colleges and universities around the U.S. Despite what they say before NCAA tribunals or even courts of law, it’s safe to say there are plenty of Claires out there who don’t feel good about the corruption or outright criminality in which they become embroiled. But, as with most corruption, those who blow the whistle may quickly find themselves out of a job.

It is refreshing, though, to see Claire’s change of heart. As she says, she knows where the bodies are buried, and she can certainly make a lot of noise if Ronald doesn’t do what she asks. She’s also growing less willing to turn a blind eye to the system itself, and she makes more than one reference to the plantation aspect of the football program — where young black men’s bodies are the tool with which the white coaches and sponsors are making money. The slavery comparison rings even truer when she notes that the players also don’t get paid, and that less than 2 percent of them will ever make it to the pros.

Also willing to pile on is Tonya (Ilasiea Gray), Claire’s no-nonsense boss who, while she may be tired of Claire’s shit, is happy to point out that, while the football coach makes millions, the women’s golf team at the school had to hold a fundraiser just to get a bus to a tournament. 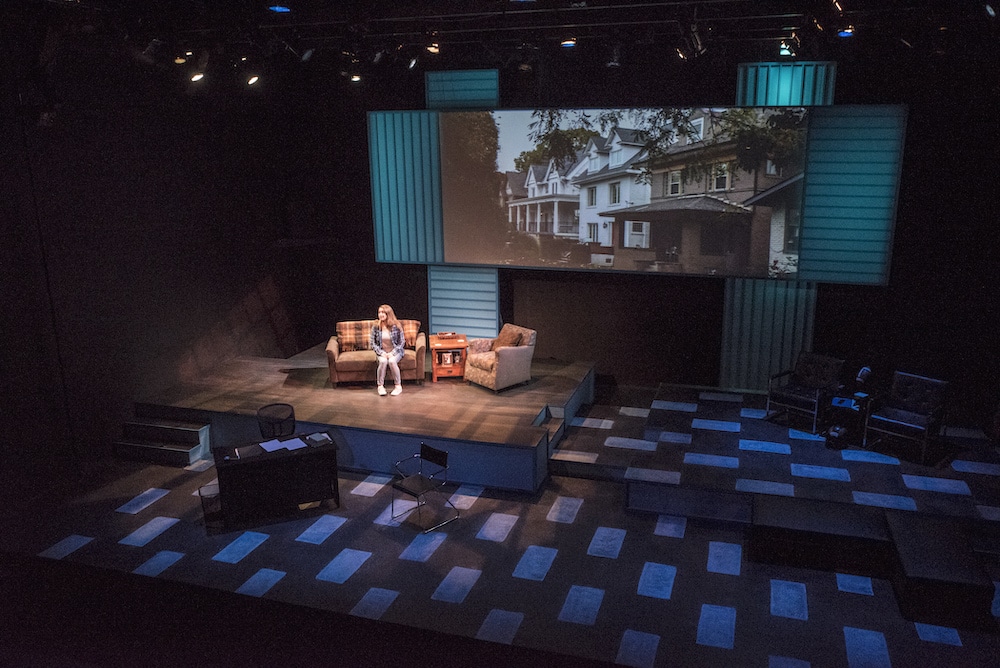 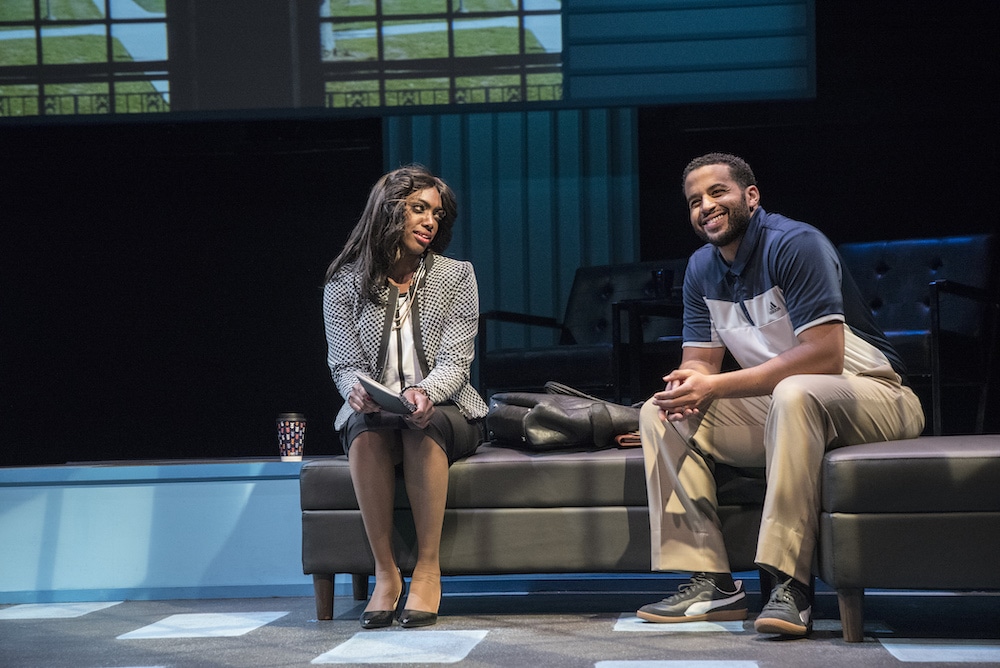 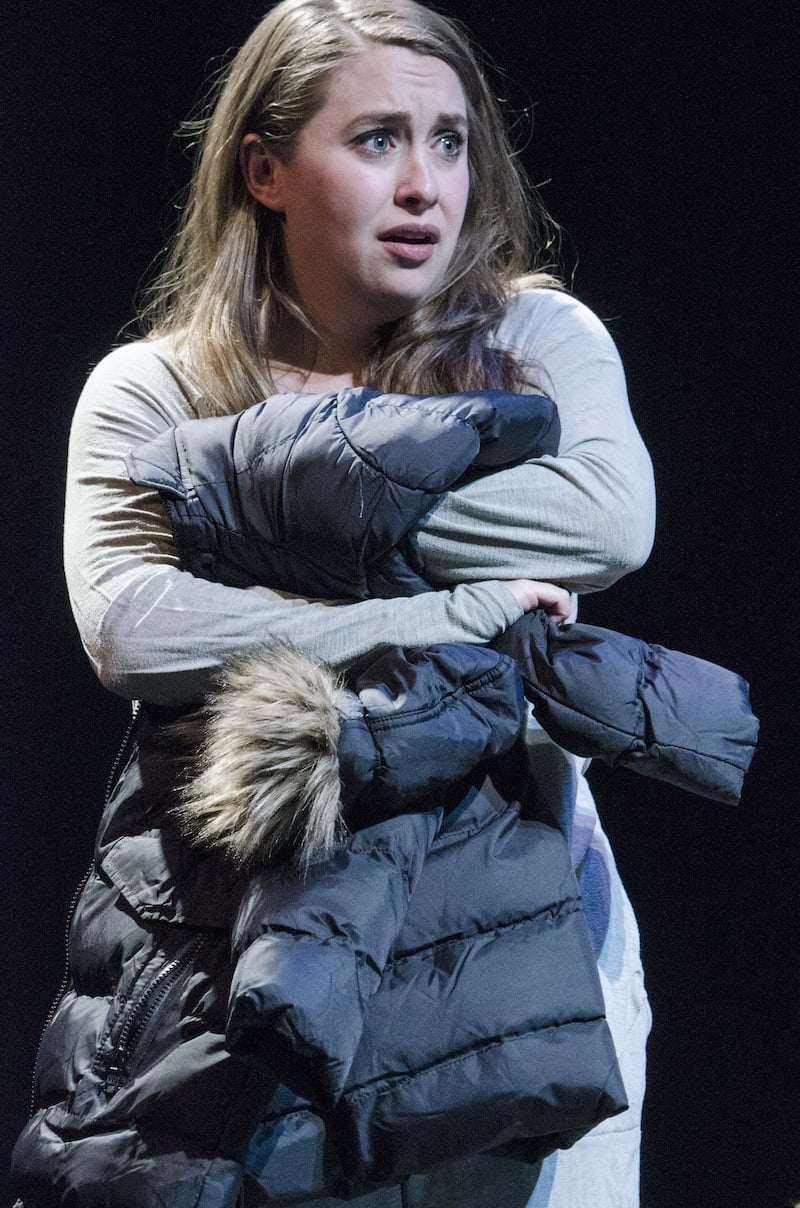 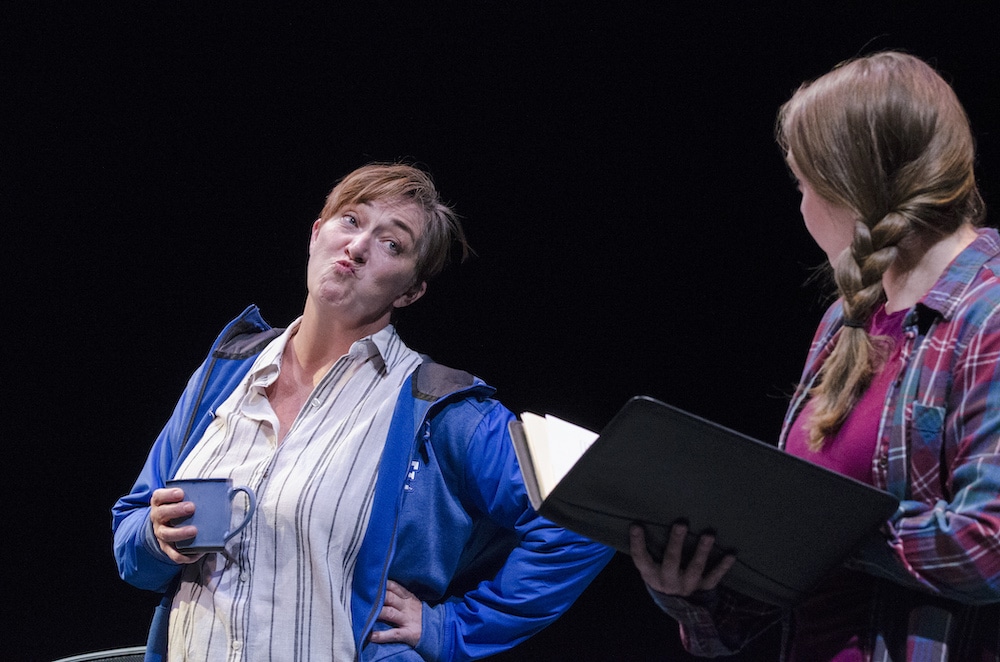 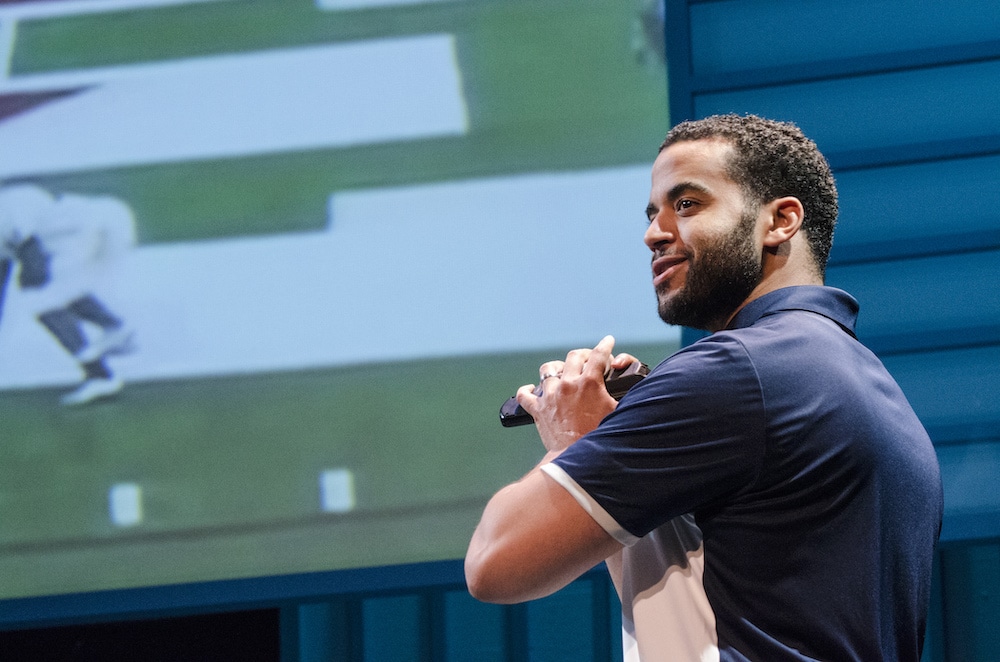 Small cast for a big story

Graham uses only four characters to tell this story; we never see any of the players whose lives are the topic of much discussion. Perhaps the point is that the players themselves are interchangeable, but the policies — spoken or otherwise — of the school remain the same despite sanctions and public awareness of what’s going on. Director Chip Walton found four excellent actors to portray the various school employees, and the set by Markas Henry is a model of functional simplicity with a giant screen upstage to show football stuff.

When it was over, though, I didn’t get the sense I’d learned anything new or seen this national disgrace portrayed in a particularly unique manner. Yes, football players are often guilty of sexual assault, colleges go easy with them on grades if they’re valuable on the field, and this kind of thing has been going on for years. Graham’s dialogue is fine, but Covington and Mena, who have the bulk of the lines, mostly screamed them at each other. With the action taking place in offices, it’s a wordy play that drags in places — even though it’s only about 90 minutes without an intermission.

As Walton noted in his pre-show comments, the overlap between sports fans and theatre-goers may be slim, and I’m not sure Sanctions will change that. Sports stories are notoriously difficult to do well on stage for obvious reasons, but Graham’s choice not to have even one player in the cast left out one very critical voice that might have added a lot.