‘The Cake’ a reminder of what binds us

The Cake” is a touching, sometimes funny, always thoughtful lesson in accepting our differences.

What’s wonderful about this production – a fictional take-off on Colorado’s real life Masterpiece Cakeshop lawsuit – is there are no villains here. Writer Bekah Brunstetter and director Melissa Livingston do a marvelous job of letting the audience not just see everyone’s viewpoint, but understand and empathize with it. And they do it through the voices of a lean, four-person cast.

Shop owner and baker Della (Victoria Bundonis) and her husband Tim (Kenneth Wayne Bradley) are every bit as emotionally complex as the lesbian couple for whom they refuse to bake. Della and Tim are a warm, loving couple whose responses to the situation reflect their upbringing and the small North Carolina town in which they’ve lived their entire lives. Even those who disagree with their viewpoint would be hard-pressed not to like them. 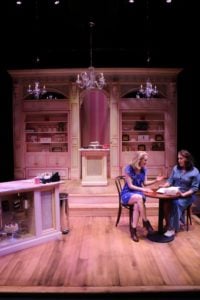 ‘The Cake’ at Lake Dillon Theatre.

Jen is a native of the town in which Della’s bakery is located. Because her mother died when Jen was young, she viewed Della – her mother’s best friend – as a maternal figure. While her feelings for Della haven’t changed, almost everything else in Jen’s life has.

After moving to New York City, she left the traditional path of her upbringing and found Macy – the worldly, whip-smart, but often bristly African-American woman with whom she fell in love.

When Della refuses, it prompts all four characters to re-examine their views, relationships and sexuality.

As the only character with a foot in both worlds, Jen’s journey is the most trepidatious. Throughout the play, she navigates a ceaseless emotional minefield. She’s torn between her love for Macy and admiration of her fiancée’s staunch beliefs, and her deep-rooted love for Della and her home.

The worst one could say about Della and Tim is that they are naïve, having led sheltered lives that allowed them to avoid some of the hard questions Jen finally forces them to face. Both Della and Tim clearly are changed by the experience. Della reflects fleetingly on her own sexuality, briefly entertaining a what-might-have-been scenario that she quickly pushes to the back of her mind.

In the play’s most memorable scene – perhaps also its most poignant and humorous – a partially nude Della, breasts decorated with frosting, attempts to seduce the befuddled Tim. Her over-the-top effort to reawaken their long-dormant sex life appears to be a humiliating failure. A sweetly hilarious scene later in the play proves otherwise.

As she attempts to help Della understand, Jen gives a torturous description of her experience with heterosexual relationships. The contrast to her fulfilling relationship with Macy is dramatic, and provides a clear explanation for her choice. Though Della won’t condone Jen’s lifestyle, she begins to understand.

And she is not alone. To some degree, each character undergoes a metamorphosis.

Even the strong-minded, well-educated and rigidly convicted Macy (who in a nice twist of irony doesn’t eat sweets) eventually lets down her guard, revealing her softer side.

This quartet of beautifully flawed, well-intentioned characters offers a sweet reminder that what binds us is not our sexual, religious or other lifestyle choices, but something much more basic – our humanity.

What: ‘The Cake’
When: Through March 31
Where: Lake Dillon Theatre, Silverthorne
Tickets & Info