Open Stage production delivers ‘the goods’ with the popular musical

You may remember the hit British film from the late ’90s promising to deliver “The Full Monty.” Now, two decades later the Americanized musical set in Buffalo, New York has come to the Fort Collins Lincoln Center.

This lively piece of theatre is put on by OpenStage Theatre and Company and directed by Kate Austin-Groen. The Full Monty tells the story of six laid-off steel workers who have been out of work for over a year — much to the chagrin of their wives and girlfriends. Feeling depressed, humiliated, and discouraged Jerry Lukowski, played by the affable Bas Meindertsma, devises a plan to make some quick cash. But he can’t do it alone, so he recruits five other jobless guys too proud to take the mall security job their partners keep nagging them about.

What follows is their hilarious attempt to learn to dance like strippers in time for a Chippendales-style show at the local club. Set in the late ’90s with the costumes to match — think neon, nylon track suits, jean jackets, mini skirts and mall hair, the six former steel workers and wannabe dancers become their own support group as they struggle through rehearsals for the show. 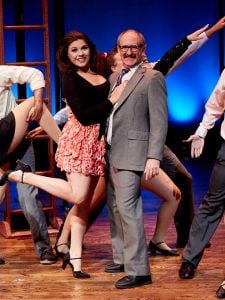 At the center of the story is Jerry, who’s divorced and desperately needing money to keep shared custody of his young son, Nathan (Dashiell Forkner). Dave Bukantinski (Jack Krause) is Jerry’s overweight best friend struggling with depression and marital issues, and he’s none too thrilled to be baring it all in front of hundreds of women. Harold Nichols (David Austin-Groen) the men’s former boss, also laid-off and lying to his wife about it.

But the man who steals the show — both the one you came to see and the one he is practicing for — is Noah (Horse) T. Simmons (Charles Ray King). Horse is a shy, aging black man who’s got the moves. He had everyone laughing, including his fellow actors on stage, with his over-the-top antics and dance moves.

Horse and his dance partners sing “Big Black Man,” a song about the fantasy some women have about “big” black men. The song is funny and had the audience dancing and singing along. Other musical numbers included “The Goods” — in which the ladies sing, giving the men a sexist dose of their own medicine — “It’s a Woman’s World” and “Big Ass Rock.” All the songs are lively, funny and serve to move the story forward.

The Full Monty encourages audience participation and you might end up with some clothing you didn’t arrive with. It has adult language and themes and even nudity (it isn’t called The Full Monty for nothing). So, you might want to leave the kids behind for this one. But once you arrive, get ready for a strip club experience like no other.

What: The Full Monty
When: Through Nov. 30
Where: Lincoln Center – Fort Collins

About the Author: Kari Redmond

Kari Redmond is an online ESL teacher trainer and writer located in Fort Collins, Colorado. She writes novels, short stories, poetry, flash fiction and essays. When she is not writing she is traveling the world (pre covid), tending to her 75 houseplants, going to live music and generally loving life. www.kariredmondwrites.com/ www.twitter.com/karirwrites www.instagram.com/kariredmond