Skip to content
Home/Posts/Reviews/Time heals all wounds? Not in ‘The Pavilion’
Previous Next

Time heals all wounds? Not in ‘The Pavilion’

How often have many of us wondered what might have been had we chosen a different path, not done that one thing that screwed everything up, or acted more graciously in the face of adversity?

All of us do to one degree or another. The healthier among us may not spend much time dwelling on such things, but for others, it can become an obsession. In The Pavilion, just opened at The Aurora Fox, playwright Craig Wright takes a hard look at the latter.

Presented with a thin reed of possibly patching up the past, Peter makes his way to his 20th high school reunion. There, he hopes to encounter his high school sweetheart Kari, whom he unceremoniously abandoned right after they graduated.

She was pregnant. He was scared and listened to his father’s advice to get the hell out of Dodge and start college. Two decades later, a mountain of guilt meets a volcano of anger that plays out for all to see at the lakeside pavilion where the reunion is being held. 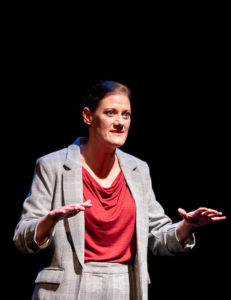 As The Narrator, Maggie Tisdale dispenses everything from deep thoughts on the galaxy to who’s screwing who in the small Minnesota town where ‘The Pavilion’ takes place. Photo: Gail Marie Bransteitter

It’s not pretty, but it’s pretty funny at times as Peter (Andrew Uhlenhopp) attempts to assuage the not-so-smoldering fury of Kari (Kelly Uhlenhopp). Director Helen R. Murray has a strong base to start from with a real-world married couple taking on these roles, and she makes the most of it.

Andrew plays Peter as a weak-willed man-baby who’s still got enough balls to step into the lioness’s den of Kari’s wrath. After all these years, two decades of no contact and the awful deed the only bridge between them anymore, he nevertheless shows up with a bunch of (swiftly rejected) flowers and his heart on his sleeve. It’s not entirely clear at first how far he thinks he’ll get — or why he’d still be interested in trying in the first place — but Andrew is convincing as an emotionally burdened procrastinator looking to heal an open wound 20 years on.

It’s a bravura performance of juggling emotions, and it’s met with equal skill by Kelly, who’s tasked with maintaining the high ground of Kari’s justifiable anger with the flicker of remaining interest in Peter she herself has clung to well into her 30s.

And then there’s The Narrator, played with shape-shifting brio by Maggie Tisdale. While she does indeed do some narration and philosophical ruminations on the action, Tisdale also serves as a one-woman chorus of characters from the town. She portrays everyone from the dope-smoking chief of police to a gossipmonger who knows all the class’s dirty secrets. Morphing back and forth between Narrator and townsfolk, Tisdale has a grand time as the jester popping up regularly to diffuse all the heavy-duty stuff going on between Peter and Kari.

And she has a few bouts of profundity, starting with her opening and closing bits about the beginnings of the universe, the immutable passage of time and the pitiful ministrations of humans trying to manage it.

As the first show of 2021 from the Fox, The Pavilion is a nice pick by Murray (also the Fox’s executive producer). We are all of us contemplating time in a way we likely haven’t before, and this play highlights a particular way in which the passing years can mean so little. It may seem ludicrous for two people to carry torches for each other over two decades, but is that really so long if the feelings are true?

On the other hand, one of Tisdale’s lines has to do with the folly of such: “Say yes to time,” she says, adding that to say no is to deny one’s ability to ever move forward. If necessary, we must blow up the things keeping us fixed in place, and the pavilion itself stands as a symbol of that: It’s due to be burned down by the fire department for practice, the space making way for some new concrete monstrosity.

It was at the pavilion that the one-time “cutest couple” had their moment in the sun, and it’s here that they might learn how to move on after so many years in thrall to the memory of something that wasn’t likely all that great to begin with.

Masks off, Kelly Uhlenhopp and Andrew Uhlenhopp start working things out as Peter and Kari in ‘The Pavilion.’ Photo: Gail Marie Bransteitter

A bit on the nose, perhaps, but being kicked out of the pavilion at midnight is yet another manifestation of time’s insistence that we must move on.

In another time, The Pavilion might have been staged at the Fox’s smaller space next door, but the larger hall offers a much greater ability to social-distance. There’s at least four seats between groups, spread