At Curious Theatre, ‘The Thanksgiving Play’ misses the comedic mark

Oh, how far we’ve come from those halcyon days of yesteryear, when the origin stories of our country were simple tales of benevolent Native Americans helping hapless pilgrims make it through those first years in the wilderness.

In recent decades, we’ve learned to revise the narrative into the pox-ridden, land-stealing bloodbath it often was. The cute little turkeys that kids make with their hands mask centuries of racism, cultural appropriation and a whole lotta whitewashing.

It’s a story ripe for theatre, and while drama may seem one way to go, comedy opens up a whole realm of other possibilities. In The Thanksgiving Play, now in a regional premiere at Denver’s Curious Theatre, playwright Larissa FastHorse takes her own sensibilities as a Native American playwright and explores what a foursome of silly non-Natives come up with in creating a historic play for kids. 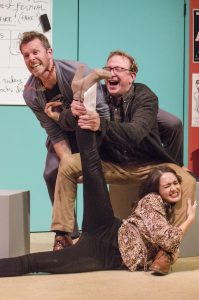 It doesn’t go smoothly, needless to say, with the kinks appearing soon after the arrival of LA “real actress” Alicia (Adriane Leigh Robinson) as the token Native cast member. Robinson’s character is a somewhat outdated stereotype — a vacuous sexpot whose only concerns are a paycheck and plenty of lines.

Wrong. Emily Ebertz as the play’s director, Logan, eventually ascertains that Alicia’s bona fides were simply that she can play Native American (deploying braids and a turquoise necklace for her headshot) — along with a handful of other ethnic identities as required.

No matter, Logan presses on with the help of street performer-slash-yoga-guy Jaxton (John Jurcheck) and wannabe playwright-slash-historian Caden (Matthew Schneck). It’s a great cast, adroitly directed by Dee Covington, and they have a lot of fun on the dynamic set designed by Charles Dean Packard. Along with your basic classroom look, the set features a bunch of small doors that open on the walls — somewhat akin to the old Laugh-In show (if you can remember that far back). From these, the actors pop out during the intro and other interstitials to highlight the absurdity of what they’re up to.

Emily Ebertz as Logan in the Curious Theatre production of ‘The Thanksgiving Play.’

So with all this great stuff in place, we’re ready for a side-splitting comedy that tears up traditional history and throws it back in our stupid, PC white faces, right?

Alas, it doesn’t quite get there. There’s a whole lot of running about, a fair amount of slapstick and juvenile humor and a competition to see which of the two men can garner Alicia’s attention (this despite Jaxton and Logan being a thing). FastHorse’s script never quite lives up to the comedic promise of the premise, leaving The Thanksgiving Play spinning its wheels for much of the show. It’s mildly amusing in places, but falls far short of comic gold.

I couldn’t help but be reminded of Fairfield, which Miners Alley did last summer. That play had a grade-school principal trying to celebrate Black History Month at a liberal-minded grade school, and it proved to be an outrageous and hilarious roast. FastHorse may not have been aiming for quite that level of hyperbole with The Thanksgiving Play, but her play’s side journeys into the lives of frustrated theatre folk serve only to dilute the potential to make this one more impactful.

Ultimately, Logan determines the best way to have their script-less play truly represent Native American Heritage Month is to eliminate said native people entirely. And not only by having no Native actors, but no Native characters at all. It’s a poignant commentary that would have been more interesting if introduced earlier in the play rather than at the very end.

As such, we spend a fair amount of time wondering where this thing is going, so when the answer is literally nowhere, it’s a bit of a letdown.

What: The Thanksgiving Play
When: Through Dec. 15
Where: Curious Theatre