The world’s smallest audience (in a good way)

With ‘Between Us,’ DCPA’s Off-Center continues its run of non-traditional theater

Time was, if you were looking to see what was going on at the Denver Center, the offerings were pretty straightforward. There was the lineup of Broadway touring shows coming through Denver Center Attractions, and the homegrown season of comedies and dramas produced by the DCPA Theatre Company.

But over the last decade or so, the DCPA’s Off-Center program has dished up an alternative menu of theatrical experiences that challenges the very nature of what “theater” is. As the name implies, the “shows” (also an imperfect word) are not full-scale productions done in a theater with an audience but interactive experiments that can take a little bit to explain.

The latest iteration of Off-Center is titled Between Us, and its most distinctive feature is its teeny-tiny cast and audience. Between Us is comprised of three options: The Deck of Cards, The Blind Date or The Whisky Tasting. The first two are for an audience of one, while you’re allowed to bring a second for The Whisky Tasting.

I was able to do two of these experiences, and I can say that anticipating the mystery of what each would entail was half the fun. In The Deck of Cards, I received a text telling me to meet on a bench in Union Station at a certain time. There I met Donnie, who spent some time talking to me about the history of Union Station and his own lifelong love for trains before giving me a deck of cards and directing me across the street to the Tattered Cover. 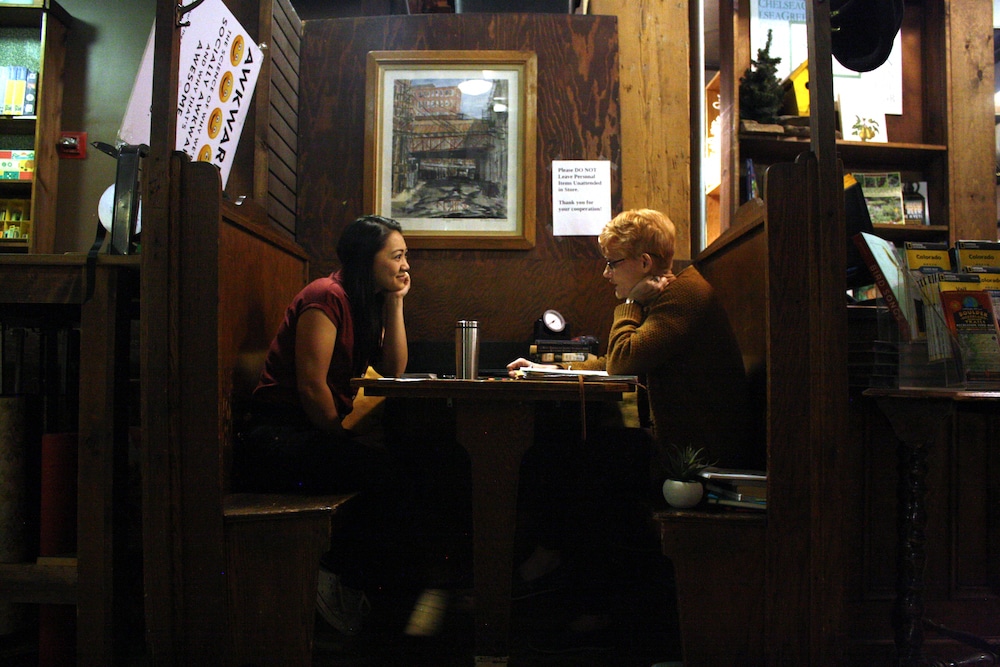 Jessica Austgen, right, was one of the guides in ‘The Deck of Cards.’

There, sitting in a small wooden booth, was an actress named Jess with a loose-leaf binder full of pages that corresponded to each card. If I pulled, say, the 2 of diamonds, she’d have a small exercise like: Draw a picture of what your childhood room looked like, and what your bedroom looks like today. Or: Sketch three endings in your life that were pivotal to you.

The session, which lasted just under an hour, felt like therapy as I talked through some of the major life changes I’d experienced over the past few decades. Jess said her role was more of a guide, and she seemed more interested in letting me talk than interrupting with a lot of questions.

It was an intriguing hour, utterly unique since what we discussed was decided by the random drawing of a card. It also took me to places I don’t often go — Union Station and the main Tattered Cover — and gave me an opportunity to learn a bit about the station from a knowledgeable person.

So thumbs-up to the deck of cards. What was this whisky tasting all about?

Scotch in a darkened theater 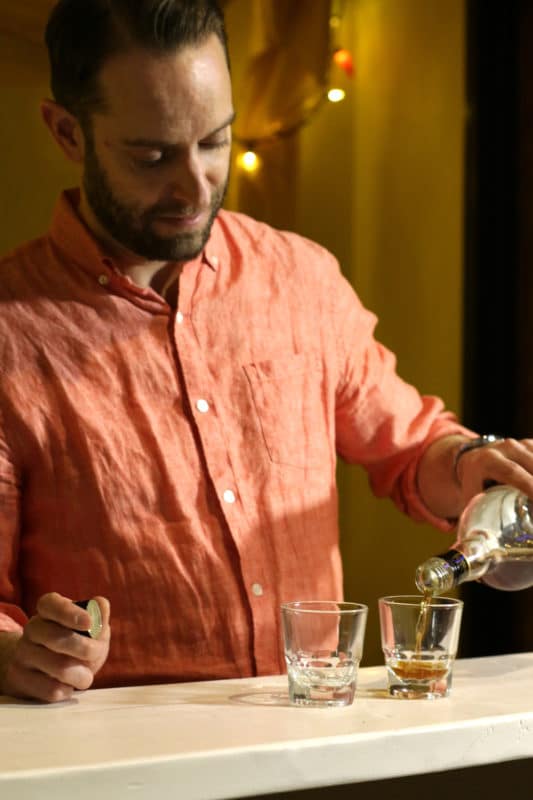 Jason Maxwell played one of the whisky mavens.

My son Max and I met Sam in the tunnel just outside the DCPA parking garage. He was carrying several old-timey pieces of luggage — including one around his neck — and wearing an apron. He led us into a darkened area of the Ricketson Theatre, where a small bar was set up and he began to unpack his things.

Sam was more out to entertain and educate, and his lessons about various whiskeys were interspersed with jokes, strange questions and peculiar exercises. At one point, I was directed to a small room containing a mirror and Sam’s recorded voice instructing me to put dots with a Sharpie on the mirror. The dots corresponded to parts of my face and were later pulled out alongside something Max had done with a map.

We tasted whiskeys from Ireland, Japan, the U.S. and, of course, Scotland. Not being a real whisky guy myself, it was an eye-opener to realize how vastly different they could be. And I wondered again why people love scotch so much (Sam equated it with death).

Compared to the solo experience, tt was nice to have someone to talk to afterwards. Max, who’s more of a spirits connoisseur than me, wished the whiskeys had been a little more “unusual” but overall we agreed it was an interesting and enjoyable experience.

The third option, The Blind Date, is a chance to wander through the Museum of Contemporary Art and discuss heady topics about life, loss and dating.

Charlie Miller is an associate artistic director for DCPA and co-founder and curator of Off-Center. He told me the genesis for the program was a response to increase competition for entertainment dollars and the rise of Netflix.

“We wanted to think more broadly about what entertainment is,” Miller said, while noting that the average age of a theater-goer nowadays continues to creep up. “People are not attending in the same ways as our parents and grandparents, and it’s a long-term challenge for any art institution.”

Along with a different kind of experience, Miller said Off-Center became a sort of theatrical testing center to explore new ideas, techniques and theatrical forms. About five years ago, the focus shifted to more immersive and experiential theater. “The audience response was unbelievable,” he said, referring to some of the early, more intimate shows.

Then, they tried something bigger: 2016’s “Sweet and Lucky.”

Taking place in a warehouse in RiNo, Sweet and Lucky was created by Brooklyn’s Third Rail Projects. The idea was to follow one couple through different chapters of their lives using over 20 different environments inside the warehouse.

It was a hit, with sold-out shows that generated a lot of buzz.

“People are still talking about it,” Miller said. “And we continue to experiment with ways to put audience at the center of the story.”

And that can be as small as the “Between Us” series or a bigger project like The Wild Party, where a sizeable audience essentially plays the part of extras in a more script-driven piece. In the middle, Remote Denver equipped a couple-dozen of us with earpieces while a guide walked us through downtown. Serving as both audience and participants, we got a fascinating and rather odd tour of downtown, and Remote Denver stands as probably my favorite of the Off-Center shows I’ve seen so far.

In Between Us, you’re not expected to play a part. You just show up as yourself and it’s fair to say that the more open you are to the experience, the more you’ll get out of it.

“They’re an exercise in empathy, an opportunity to talk to a stranger and have a deep and meaningful conversation,” Miller said. “Our cellphones are often our protection in public spaces and we rarely have the opportunity to have a conversation with a stranger. That’s what’s so exciting to me about Between Us.

Next up for Off-Center

The Between Us shows run through May 26, then Off-Center switches gears to a very different kind of experience called The Last Defender. Here’s the promotional copy:

Head to The Defenders’ underground headquarters, where we’ve deployed artificial intelligence alongside 8-bit arcade-style computer technologies to control our nuclear weapons. Suit up and work as a team to gather information, solve puzzles, and make increasingly difficult decisions in real time. Do you have what it takes to complete The Defenders’ final mission and save the world?

The Last Defender runs May 28 through July 28. Tickets/Info 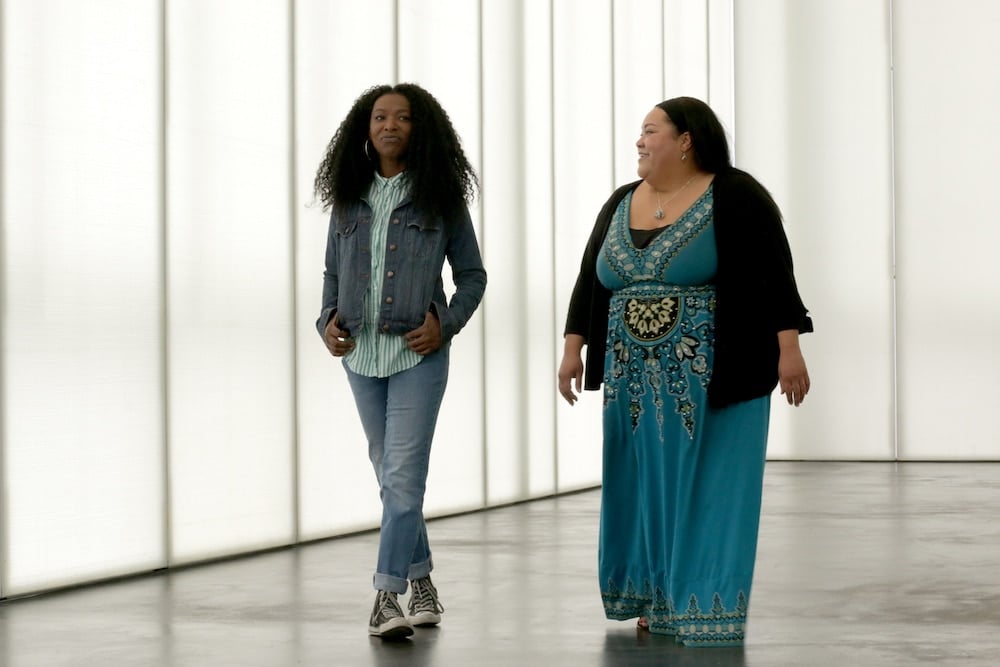