Theatre in the time of COVID-19

When the French 74 is bearing down on your 28-gun frigate and your only recourse is to sail as fast as you can, tossing your cannons overboard was a last, desperate measure.

This I learned from having read Patrick O’Brian’s Aubrey-Maturin series half a dozen times (some may know it from Peter Weir’s 2003 film Master and Commander, starring Russell Crowe and Paul Bettany as the captain and surgeon dynamic duo). Once your guns went over the side, you were pretty much resigned to being sunk, burned or captured – none of them very appealing prospects.

I was thinking of this recently when I saw the email from the Denver Center announcing major staff reductions and show cancellations. I don’t know who all lost their jobs, but I know one of the big guns, John Moore, was let go. As the DCPA’s one and only senior arts journalist, Moore had the kind of job many writers would envy, and it was a rather unique one in the theatre world, where staffs are typically kept fairly lean and “luxuries” like an in-house arts journalist typically didn’t exist.

No one, they say, is irreplaceable, but it’s hard to imagine anyone ever being able to fill Moore’s role again – assuming his position is every uneliminated. Far from just being someone who wrote about theatre, Moore was an advocate for theatre and theatre people in so many other ways. He was the dean of Colorado theatre, its guardian angel, its head cheerleader and a constant presence at hundreds of shows every year. His voice will be missed, but I imagine he will find a way to get back in the game once the lights come back on.

Juliet Wittman at Westword has a very nice piece about John Moore here.

COVID days for me so far have been characterized by being pretty busy at work (thankfully no layoffs or pay cuts in my biz so far) while work here on the OnStage Colorado website has ground to a halt along with all the theatres. I’ve been trying to stay on top of the calendar and am poised to start updating things as we get closer to May, but there’s still so much uncertainty. When the lights do come back on, what will that look like? Will there be half houses to start? Truncated schedules, masks on the actors, masks on the audience members? Sneeze-guard proscenia? 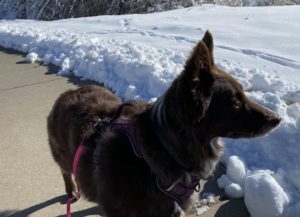 Desert dog gets used to the snow.

Time will tell. Theatres large and small typically work on thin margins, so it’s unfortunately pretty likely that not all of the live theater companies we went into this thing with will emerge on the other side. Some may come back stronger than ever, and we may see some iterations of live theatre that we haven’t even thought of or imagined yet. There has to be a silver lining or two, right?

And so we do what we can to pass these endless days and nights. I’ve been kept busy with a newly adopted dog. Macy was one of my father’s border collies, and when he passed in February, we adopted her and brought her back to Colorado from Pahrump, Nevada. Since we’ve never been dog owners, it’s been a wild ride getting used to having a four-legged friend in the house, and she’s only now gotten comfortable enough to let me type for a bit without lifting up my arm with her nose for some more petting.

Other folks have turned to Facebook, which has long been a gathering place for the theatre community. Now more than ever, theatre folks are on there sharing their stories, their heartbreaks, their jokes and memes, their hopes for a better day. One of my favorites has been actor Kelly Uhlenhopp, who is the sole person left in her office and who has been documenting her days in solitary with very funny posts and poses using some of her extensive wardrobe options.

Check out the many looks of Kelly Uhlenhopp