Turning onto Colfax last Saturday night, I was greeted by a sight that lifted my spirits: The iconic sign for the Aurora Fox theatre — lit up after months of darkness.

It’s been a dark time for many things in this time of COVID, but particularly for theatre, tethered as it is, mostly, to indoor spaces. So far in Colorado the only other theatre to return to live indoors shows has been the Candlelight Dinner Playhouse, a cavernous space where every other table is empty for social distancing.

The Fox is a large space, too, and the theatre is taking advantage of it to present a show with a damned-near empty house. After the elation of seeing that sign and the thrill of entering a theatre lobby again, I was confronted with the mixed emotions of seeing that tiny audience that was, nonetheless, delighted to be there.

Baby steps, I reckon. All alone and masked at the end of aisle G, I definitely felt safe, but certainly missed the excitement of a packed house on opening weekend.

It is what it is.

Read John Moore’s take on how secure he felt at the Fox.

Blast from the past

Tomfoolery: The Words and Music of Tom Lehrer is a compendium of sarcastic, edgy little songs penned and performed by a Harvard guy who wanted to stir the pot back in the ’50s and ’60s. He may have been a bit before my time since I’d never heard of him, but apparently he was quite the thing back in the day. This show was put together in the 1980s by Cameron Mackintosh and Robin Ray, and it’s directed here by Kenny Moten.

The setup is simple: Four actors play a college student (Mosés Brown), a nurse (Corey Exline), a bookworm (Tim Howard) and a writer (Valerie Igoe). Moten found some interesting connections between the songs and today’s quarantine living. The action takes place in five separate areas where the characters are slogging through their quarantine, and there are plenty of contemporaneous gags involving facemasks, social distancing, disinfectants, toilet paper and the like.

Driving the show upstage at his keyboard is musical director Trent Hines. He powers through the mostly upbeat ditties with remarkable energy, and the actors do a fine job delivering the somewhat musty wit of Lehrer. A glance at some of the numbers should give you some idea of the tone: “Smut,” “The Masochism Tango,” “Pollution” and “Poisoning Pigeons in the Park.” They range from simply silly to some more poignant, such as “National Brotherhood Week” — a stinging reminder that racism in all its forms has been around forever.

Brown has a lot of fun with “The Elements,” a tongue-twister sung to the tune of Gilbert & Sullivan’s “Modern Major General” that manages to hit the name of 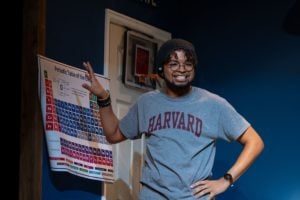 everything on the periodic table. And we’re reminded that Lehrer wrote songs for the educational TV show The Electric Company with “Silent E” — a clever exposition about the powers of that most common vowel led by Igoe. (That was one I vaguely remember having heard as a kid when my third-grader teacher Mrs. Edelsohn would wheel in the TV and tune into The Electric Company while she snuck out for a smoke.)

Despite hitting many societal ills in the tunes, Tomfoolery is, as the title suggests, mostly a light confection. All things considered, it’s probably just about right for the Fox to open its socially distant 36th season. It runs just about an hour and was well received by the pint-sized audience.

Wrapping up with the wonderfully apropos “We Will All Go Together When We Go,” Tomfoolery is, if nothing else, a reminder that even the grimmest subjects can be sent up with a clever song. If it makes us forget, just for an hour, the shit show going on outside the theatre, it’s an evening well spent.