Turning up the funny to 11 in ‘Twelfth Night’

Viola is in disguise as a man, Cesario, and Sir Andrew believes him to be a rival for the love of Olivia (Krystel Lucas). Goaded into a sword fight neither of them wants or is prepared for, Folmar’s Sir Andrew rips a few pages out of Robin Williams’s book of physical comedy and brings down the house with an apparently ad-libbed series of ludicrous attempts at swordplay. At one point he jabs the sword in Cesario’s direction and chirps “BOOP!” — as if to poke her in the nose.

It’s tempting to say Folmar is a scene stealer — for indeed he is — but the scenes are also well defended by an outstanding cast that makes this Twelfth Night a joyous, wildly entertaining and downright hilarious outing that I can easily say is the funniest production of any of Shakespeare’s comedies I’ve ever seen.

DCPA Theatre Co. stalwart Sam Gregory hits the stage as Malvolio like he’s been shot out of a cannon. Gregory told me after the show that he’d longed to play this part for years, and it shows in the absolute dedication the actor put into coloring in every square millimeter of personality Malvolio might possess. With costume, makeup and twirly moustache making him look like a mashup of John Cleese and the Jack of Clubs, Gregory puts on a master class in how to inhabit a comic roll to its fullest.

The third leg of this sturdy comedic stool is Larry Paulsen as Feste, the Fool in Olivia’s court. Channeling Wallace Shawn (a leaner version), Paulsen is a delight as he spins in and out of scenes, delivering insults, bon mots, bits of song and plot points all while dressed in an absurd costume that looks like something out of the Macy’s Thanksgiving Parade. 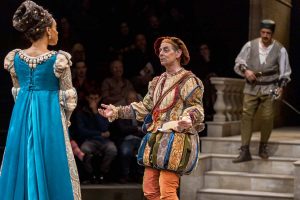 Krystel Lucas as Olivia and Larry Paulsen as Feste.

The costumes are an entity unto themselves, a dazzling compendium of English Renaissance fashion reimagined with contemporary flair by Kevin Copenhaver. It’s an astounding demonstration of how much personality a costume designer of Copenhaver’s talent can inject into a performance, and it’s no exaggeration to say the costumes become characters in and of themselves.

In addition to his initial fabulous rig, Gregory gets to trot out in an even more outrageous getup as part of the famous scene where he’s gulled into trying to impress Olivia. His “cross-gartered” yellow tights seem to give Malvolio wings, making him so giddy that Olivia has him locked up as a lunatic.

Coleman made the choice to set this Twelfth Night not in the 23rd Century or New York City in the 1970s or in a disco or a Club Med or whatever. It’s set in Shakespearean times, where it belongs. The action takes place in Illyria — Croatia’s Dalmatian Coast — and it sets the bar for every mistaken-identity story ever told after.

Viola and her brother Sebastian (Alex Purcell) are separated in a shipwreck, and both assume the other is dead. She makes the choice to put on men’s clothes and join the court of the local bigwig Duke Orsino (Corey Allen). Orsino sets Viola-as-Cesario at work wooing Olivia, and the latter promptly falls for her/him.

Meanwhile, Olivia’s kinsman Sir Toby Belch (a wonderfully ribald Lawrence Hecht) tries to get his pal Sir Andrew in her favor. Alas, the poor guy doesn’t have a chance — not only because he’s well outside her class but because she’s smitten with Cesario. Malvolio and Orsino will fare no better.

There’s a lot of mis-pointed libido in Twelfth Night, and much of the confusion and comedy comes from the other characters trying to guide Cupid’s arrows. In addition to the actors who have all the fun being funny are those pining in the center of the love polygons trying to get what they want — while also trying to parse the meaning of the outrageous events occurring around them.

Corey Allen as Orsino and Mehry Eslaminia as Viola.

As Orsino, Allen is magnificent. Copenhaver has, of course, decked him out in an outfit that’s majestic and period-appropriate but that also hints at a little bit of ’70s Elvis. As the ridiculous action flows around him, Allen keeps his cool and embodies well Orsino’s spot as the calm center. His counterpart is Olivia, who at first appears to be as centered but is later revealed to be compromised by her crush on Cesario. Lucas inhabits this role beautifully, alternating her noble bearing with increasingly helpless forays into romantic longing that bely her power with a sweet vulnerability.

In the Viola/Cesario role, Mehry Eslaminia is a ball of fiery energy. Sporting an Eastern European accent, her long hair contained in a cap, she’s at the center of many scenes and does nice work threading the serious through the silly. As the “straight man” in the absurdist sword fight, she’s challenged with not breaking and laughing at Fomar’s capers. Hopefully they got it all out at rehearsal.

Also notable are Kim Staunton as Maria, who has fun at the center of Sir Toby’s little gang; Kirk Taylor as Captain/Fabian; and Erick Gonzalez as Antonio.