Strong cast and a wild, hilarious show make for a fun night of theater

Faux-dire warnings aside, the Vintage Theatre’s production of “A Gentleman’s Guide to Love and Murder” is thoroughly entertaining, full not only of ample comedy but powerful performances from a very busy cast.

“A Gentleman’s Guide” follows young Monty (Andy Seracuse) as he tries to become part of the D’Ysquith family, a wealthy and noble clan from which Monty’s recently deceased mother had –unbeknownst to Monty – long-ago been banished. Driven to escape his humble origins by love for the enticing but narcissistic Sibelia (Anne Jennes), Monty plots a path to the top of the family tree – one that will come with wealth and a title. Eight human obstacles – members of the D’Ysquith family – stand in his way.

Monty decides to eliminate them all.

The show begins with a musical warning from the cast that murder and mayhem will ensue, and the suggestion that audience members take their leave before the horrors begin. Thankfully, no one takes their advice; it would be a shame to miss the hilarity that follows.

It’s tough to say who should get top billing here. Seracuse as Monty is not only convincing as a simultaneously sweet and utterly duplicitous lead, his singing voice is startlingly powerful. He successfully juggles not only some challenging musical arrangements, but lyrics, lines and dance steps that demand a fast and complex delivery. And he does it all with seeming ease.

But then there’s Bill Brandon, who plays multiple members of the D’Ysquith family – quirky characters of both genders and distinct personalities. Though his vocals are not quite as strong as Seracuse’s, his comedic interpretation of the D’Ysquiths is pure delight. Not far into the show, it seemed the audience collectively leaned in every time Brandon appeared on stage – eager to see and hear his every gesture and word.

Monty’s two love interests were also not only spot-on in their performances, but equally intriguing in different ways. Between giggles, snorts and coy glances, the intellectually vapid but sexually savvy Sibelia plays Monty effortlessly – repeatedly drawing him in, then pushing him (often literally) away. Her change of heart comes only after realizing her once-pedestrian pursuer is in line to become the next earl. Sibelia is wonderfully evil, with occasional and believable undertones of innocent bewilderment. It’s a plus that she’s striking, which makes Monty’s infatuation understandable, if not logical.

The ensemble adds greatly to this story with often biting social commentary and indignant expressions that humorously highlight their points.

Director Bernie Cardell makes good use of the theater’s three stages, with the action shifting from one to another. During one scene, an actor is on each stage, making it tough to decide who to watch.

The flouncy red curtains are likely a permanent fixture at the Vintage Theatre (this was my first visit), but they served as a perfect enhancement to this vaudeville-esque production.

To say much more would take away from the experience of this fast-moving, always amusing tale. And that would be a crime worse than any depicted on this stage. 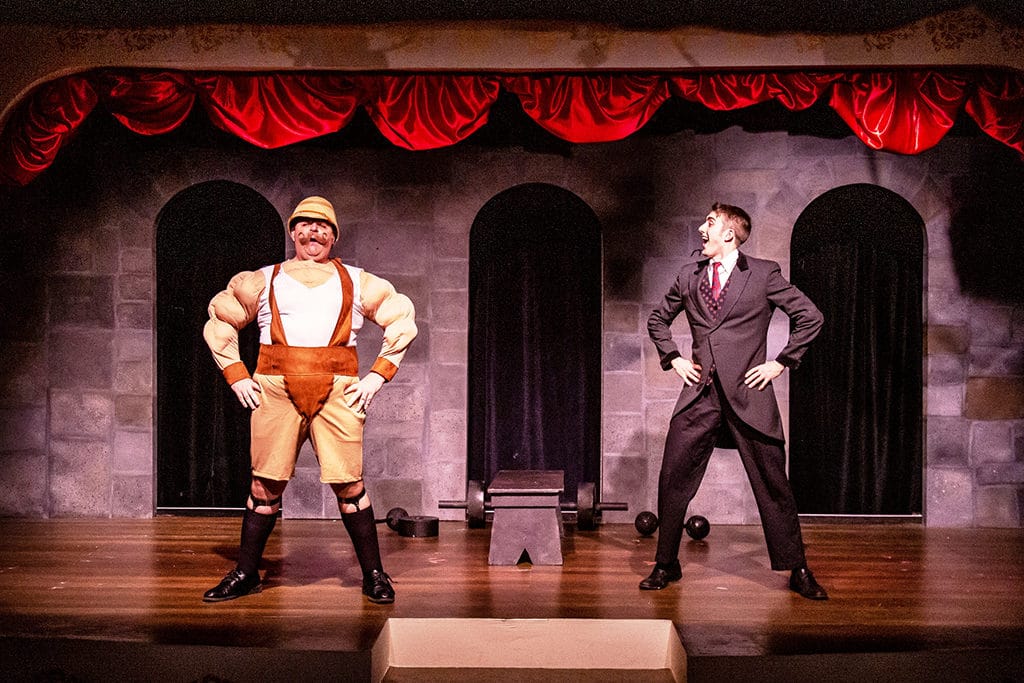 What: “A Gentleman’s Guide to Love and Murder”