A road trip for the ages

At the Aurora Fox, ‘Miss You Like Hell’ kicks at the heartstrings

At a low point in the mother-daughter musical Miss You Like Hell, angry teenager Olivia spits “You’re garbage!” in her estranged mother’s face. By the end of the show, the two are inseparable — even when being together is next to impossible.

What happens between those two things is a road trip the two take from Philly to LA by way of Yellowstone that manages to explore the peaks and valleys of mother-daughter relationships and the best and worst of America. It’s a 65-mph therapy session that probes everything from absentee parents, depression and teen sex to undocumented immigrants and gay marriage.

It’s a messy but winning combination that makes for a strong start for the new season at the Aurora Fox. Written by Quiara Alegria Hudes — who co-wrote In The Heights with Lin-Manuel Miranda — with music by Erin McKeown, Miss You Like Hell covers a lot of ground physically and emotionally, careening hither and yon and taking unexpected turns on a regular basis. As directed by Helen R. Murray, it’s a crisp, fine-tuned production that features a remarkable cast with a solid backing band (led by David Nehls) and a spare, modern set that relies on a variety of projections to set the scenes.

As the mother, Beatriz, GerRee Hinshaw is a powerhouse. Beatriz is that takes-no-shit personality who barrels her way through every situation and, for the most part, gets what she wants. Her kryptonite is the byzantine and dysfunctional U.S. immigration system, which is also at the roots of her estrangement from her daughter.

Adriane Leigh Robinson plays the daughter, Olivia, a suicidal and disheveled mess whose anger at her mother for abandoning her is all consuming. Robinson does a fantastic job moving Olivia from the damaged waif we see at the top of the show to the confident young woman she is at the end. Her heart perpetually on her sleeve, Olivia doesn’t want to hear Beatriz’s lies, excuses or explanations, but Robinson convincingly gets the character to where she needs to be to grow and forgive.

Although Miss You Like Hell predates Cheeto Benito (it debuted in 2016), the bureaucratic purgatory in which Beatriz lives is something millions of immigrants have been enduring for decades. For those who may not know someone in this position, the show does a good job of putting a human face on what it’s like to always be looking over one’s shoulder, wondering if that knock on the door is ICE, or if a broken taillight will morph into a one-way ticket to Tijuana. 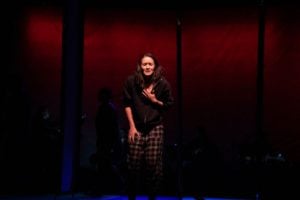 Beatriz has kept most of this from Olivia, which explains not only why it was difficult for her to stay in her daughter’s life but also why Olivia is so angry and depressed. With no idea why her mother absented herself, she assumed the worst and allowed it to consume her. The relationship is a tangled knot with a lot of loose ends, and the script is beautifully designed to pull things out a strand at a time through the musical numbers.

Hinshaw and Robinson are joined by a diverse and talented ensemble of seven actors who comprise both a chorus and an array of recurring and one-off characters. Runner Francisco plays a charming Peruvian man in South Dakota whose own tragic story leaves him open to helping the stranded women. Stephen Day and Dwayne Carrington play a gay couple, Mo and Higgins, who also come to their aid after the women help them with their own get-married-in-every-state adventure. Their number, “My Bell’s Been Rung,” is another highlight and one of the more joyous moments of the show.

Olivia’s blog, Castaways, has some devoted followers who read her tormented posts and offer advice. One of these is Pearl (a delightful Jasmine Jackson), a junior ranger at Yellowstone who encourages Olivia to pop by on her way west. (The Yellowstone angle sets up one of the more memory numbers in the show — a very funny love song to our first national park that delighted the audience on opening night.)

Sharon Kay White plays Beatriz’s immigration lawyer in LA with a mixture of compassion and hard-nosed reality, and Tom Littman has the unenviable job of portraying an officer and guard. Corey Exline has a great scene as a Wyoming court clerk whose stonewalling of the two women’s requests for help is offset by her own admission of helplessness.

Now in her second season as the Fox’s executive producer, Helen R. Murray clearly has the reins of the theatre firmly in hand. Determined to pick shows that are highly relevant to Aurora’s diverse population while also recruiting top talent and mounting meaningful and highly entertaining productions, Murray’s direction of Miss You Like Hell sets a bar that’ll keep the Fox hopping.

This is a tough show to stage, with so many different scenes and locations, and Murray’s choice to depict it via moving panels and projections was spot-on. Scenic design is by Brandon Case, and the panels he engineered are articulated by the ensemble in well-choreographed movements that don’t detract from the action. The final scene features a different kind of panel I won’t give away here, but they’re necessary and artfully executed.

The projections by El Armstrong are extremely well done. From highways in the background as the women move down the road to the depictions of Oliva’s blog comments to a medley of Yellowstone imagery, they all get the job done without hanging around too long and being a distraction.

Choreographer Jessica Hindsley had her hands full moving the sizable cast through their dance numbers amidst the aforementioned moving panels, and no doubt helped Murray with some of the non-dance choreography in this complex production. Everything else, from the lights (Brett Maughan) to the sound (Curt Behm), the costumes (Nicole M. Harrison) and the crew led by production manager Jen Orf (who also did props) to stage manager Amelia Retureta and assistant director Steven J. Burge point to a theater program at the top of its game.

Miss You Like Hell is one of those shows that explores every range of human emotion, and while the focus may be on the particular plight of an undocumented immigrant, the themes related to family, loss and longing and the power of human connection are universal. And on top of that, Miss You Like Hell is also funny as hell. It’s another strong production from the Fox and one not to miss.

What: Miss You Like Hell
When: Through Oct. 13
Where: Aurora Fox