At Curious Theatre, an explosive dive into race relations

There are many ways in which the injustices visited upon black people in America have been explored in theatre. But playwright Antoinette Nwandu may have found the perfect recipe to really nail it by stranding her characters on a metaphorical island from which there is no escape — save death.

In Pass Over, Greg Geffrard and Gregory Fenner play Moses and Kitch — two homeless young black men on a street corner. Set mostly in present day, their characters also morph backwards in time on occasion, visiting 1855 slavery days and even ancient Egypt. The fluid nature of the characters being represented is telegraphed at the top of the show, where the two men takes turns rapidly changing costumes to portray a variety of black figures ranging from black-power activists to a basketball player, a slave to a rapper.

As Nwandu says in the program notes, Pass Over is meant to operate on a biblical layer set in Egypt during the days of Moses, a slave-days layer, and a modern-day layer. The whole idea of “passing over” is related to the hope that, like Moses and the Jews, somehow waters could part and the two men could get the hell off that street corner.

But it’s not just a street corner, it’s America, where young black men have to worry about getting hassled or shot by the “po-po” every waking second. It’s the America where whites in power — be they cops, landlords or even nervous suburbanites with itchy 911 fingers — maintain a heavy and oppressive presence that no amount of “progress” can seem to erode. And no, there will likely be no magically parting sea to the promised land for Moses and Kitch, which creates all the tension in the play: Will they get out, and if so, how? And, more importantly, is there a way to get past the white gatekeepers who, wittingly or not, maintain the systemic racism that keeps them on the island?

A master class in the n-word

It took a little while for this white guy from Highlands Ranch to acclimate to the fast-paced urban patter of Moses and Kitch. It’s jarring to hear the word “nigga” uttered in almost every line, for sure, but fascinating to see how the word is used so flexibly by these men. Depending on how it’s said, it’s an expletive, a question, an accusation or a term of endearment. It can be a handy portmanteau (“nigga-damn,” “my-nigga”), an insult, and a whole lot more.

It’s even available for use in addressing a white guy, which surprised me.

The white guy in question is shapeshifting Curious Theatre regular Erik Sandvold, who has the unenviable job of representing the entire white race. Sandvold appears early in the play as a lost white dude who appears on the corner bearing food for his mother. Moses is suspicious, but Kitch is hungry and when “Mister” offers the food he can no longer deliver to his mother (because he is lost, you see), they let him hang around.

So white he’s clear, Mister is fascinated by the two men, and at one point asks why they can use the n-word so liberally while he, as a white man, cannot.

“Because it’s not your word,” Moses tells him.

Sandvold later appears as “Ossifer,” an obnoxious cop who uses the n-word with the “er” on the end and steals the apple pie Mister left for them earlier.

There’s injustice for you. 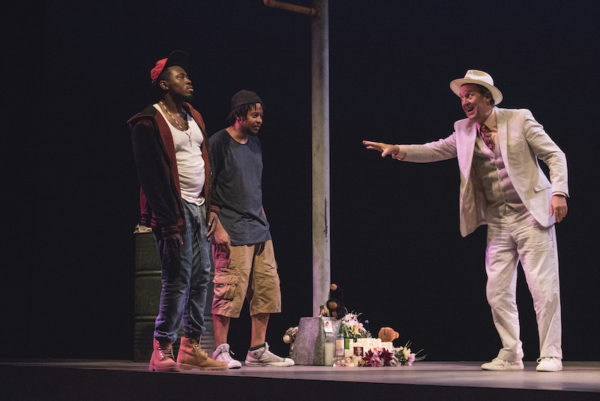 Greg Geffrard, Gregory Fenner and Erik Sandvold in ‘Pass Over.’

Director Steven Sapp has rich material here, and he rolls out the action on a spare but functional set designed by Chip Walton. The duality of the black experience is teased out in the two characters, with Moses representing the jaded realist and Kitch the ever-hopeful. Sapp skillfully shapes the script to the action as we watch the inevitable unfold.

Spot-on sound design by Jason Ducat and lights by Richard Devin both contribute to the ominous mood.

When Mister reappears toward the end of the show, it’s hard to separate him from Ossifer. As it turns out, we don’t have to. I’m not sure if Nwandu is saying the white cop’s gun is as lethal as Mister’s perplexed indifference, but it’s hard not to escape that conclusion.

This is a tough script, a gritty play that hits hard and fast. As Moses, Giffrard is fantastic. His Moses is a world-weary traveler who gets what he expects, and the actor teases out a vast quantity of character tics and quirks in portraying him. Similarly, Fenner goes deep with Kitch, and the two actors visibly feed off each other’s energy throughout the play. They may not be related, but they are brothers, in it together. Their strong connection is palpable, and it transcends each scene.

Sandvold is superb in a difficult role that has him portraying every black man’s worst nightmare. His goober act as Mister is oddly affecting and transparently phony, while Ossifer is deviously uncaring.

In the end, Pass Over really gives whites something to think about. Blacks already know all this shit, all too well. Nwandu’s script is masterful, epic and timely.

“Progress. That is the wall behind which white America hides, including white liberals. (Even many black leaders have absorbed and regurgitate the progress narrative.) It expects black people to swell and applaud at their effort. But, how is that a fair and legitimate expectation? Slavery, white supremacy and racism, are horrid, man-made constructs that should never have existed in the first place.”

Nwandu points a similarly accusing finger with Pass Over. As Curious Theatre’s slogan goes, “No guts, no story” — see it if you dare.