Skip to content
Home/Posts/Reviews/Boulder Ensemble Theatre Co. presents an online spin of ‘The Seagull’
Previous Next

Anton Chekov’s The Seagull has been performed by many different theater companies over the past 120 years. A tale of unrequited love, The Seagull tells the story of not just one love triangle, but several love triangles whose points touch and then blend together until there is nothing left but a mishmash of unhappy folks.

The play culminates in one fellow shooting himself because the woman he loves, well, she loves someone else. Unrequited love, as I already said.

The fellow who ends up shooting himself was named, or is named (as he’s still living in The Nina Variations) Treplev. The woman he loves, who does not love him back, is named Nina, the Nina of The Nina Variations. Treplev and Nina, in The Seagull, share a scene together near the culmination of the play in which Treplev once again professes his love for Nina, and Nina responds by telling Treplev that she loves a more famous writer named Trigorin.

For the curious, Trigorin does not requite Nina’s love. Surprise! 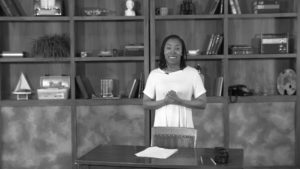 Now showing in an online-only production from the Boulder Ensemble Theatre Company, The Nina Variations was written by Steven Dietz and directed by BETC Producing Artistic Director Stephen Weitz. It’s an examination of the different versions of the interaction that might’ve taken place in Treplev’s office between Treplev and Nina before Treplev did away with himself. The running theme through each of these possibilities is that Nina does not love Treplev (I hate to keep returning to this theme, but, as I mentioned previously, Unrequited Love), and that Treplev is not the caliber of writer that Trigorin is.

Treplev is also trying to be a writer, which makes Nina’s love of Trigorin that much more bitter for Treplev.

There are 43 short versions of this interaction comprise The Nina Variations. Both men and women play both Nina and Treplev in BETC’s production of the play, though the characters are easily recognized by the color of the clothing worn by the actors. Nina always wears white, and Treplev is always dressed darkly. The actors of BETC’s rendition showed a great ability to maintain cohesive demeanors for the characters even as the characters switched between multiple actors. 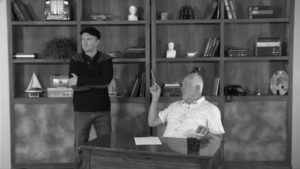 Though streamed through Vimeo, The Nina Variations maintains a theatrical feel through a camera angle that is stable except for a few, rare cuts to an only slightly differently angled camera. The play was shot in black and white, making the differences in the characters’ bright and dark shades more apparent. Nothing in the camera movement takes away from the actors’ performances, and though one is sitting at home, there is a similar feel to sitting in a theater. The set is a simple office, with just a desk, a chair, and some other minimal props used effectively but not distractingly. Under Weitz’s direction, the play holds up well to the basic camera shot.

Heather Doris does a wonderful job conveying humor in her portrayal of Nina alongside Casey Andree’s Treplev, while Chloe McLeod stood out for her dramatic chops. Adrian Egolf and Luke Sorge showed tremendous chemistry as each portrayed a character of the opposite gender, showing that human emotion is not confined by one’s sex.

One drawback of the play is that, because The Nina Variations is an experimentation on a single scene, there is no storyline or plot pushing the play forward. It is reminiscent of literary fiction versus a plot-driven novel. While this can certainly be appreciated by theatre aficionados just as literary fiction has a niche audience of devotees, the general public might find it difficult to lose themselves in a story that continually resets itself. 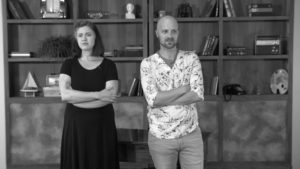 But, if one is looking for a theatre experience that does not endanger them in a global pandemic, and a play that questions the different ways a heavy conversation can progress, then The Nina Variations is worth checking out. 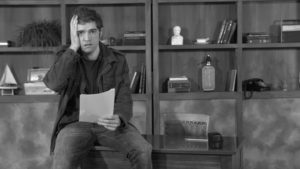 One suggestion: I highly recommend potential audience members read the play (or even the SparkNotes summary) of it  — or watch the 2018 film to gain context before watching. The repetitious nature of The Nina Variations will become more accessible if one understands the emotional weight and complexity of the characters’ relationship beforehand.