From the superb cast and staging to powerful songs and choreography, this fresh production explores the range of human emotions set to bluegrass music

This powerful story spans the years 1945-1946 with flashbacks to 1923-1924 and is set in the Blue Ridge Mountains of North Carolina. But rather than play down to the Appalachian setting and bluegrass musical genre, Bright Star instead pays respectful homage to that heritage with a blend of song and dance that supports and expands upon the story.

The Arvada Center also plays homage to the opening of its 44th season by crafting a seamless production despite a large cast and a myriad of scenes featuring changes to the set – cleverly incorporated into the song and dance routines. Everything flowed together — from the superb casting, live bluegrass orchestra and fluid choreography to the well-timed staging, minimalistic scenery, and quality of the lighting.

As its title implies, Bright Star is ultimately a tale about the unfaltering optimism of the human spirit despite significant obstacles that can be placed in our path – particularly in the post-war euphoria of 1940s America. The musical is based on a true folk tale, “Iron Mountain Baby,” which inspired contemporary artists Steve Martin and Edie Brickell to create their 2013 Grammy-winning bluegrass album, “Love Has Come for You.” This collaboration eventually led them to write and compose the music for Bright Star.

The art of storytelling

It is said that bluegrass music is the art of storytelling, and that is exactly what this production does. The smooth blending of dialogue and song is a refreshing break from so many traditional musicals that struggle to blend the two (yes, I’m talking to you, Sondheim).

The well-crafted songs carry simple but seductive melodies, along with clear and direct lyrics that have a sweet, authentic quality without becoming too saccharine. They range from heart-wrenching ballads and yearning love duets to energetic hootenannies. Under the music direction of Rod A. Lansberry, the mostly acoustic score is beautifully played.

While Bright Star takes us through a broad spectrum of human emotions — from the depths of despair to the soaring heights of rekindled love — one could argue that the characters are a bit one-dimensional. But the range of emotions that sweep through the songs help amplify the story and are ultimately what gives the play its depth. 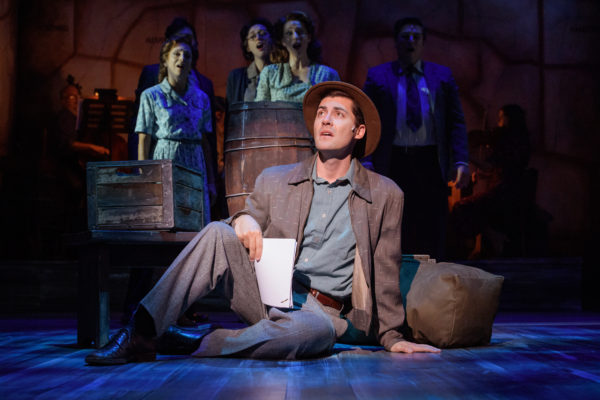 The play launches with a powerful performance by the main character, editor Alice Murphy (deftly played by veteran performer Merideth Kaye Clark). Alice sets the stage for the post-World-War II era and explains that instead of overseeing other people’s stories, this time she is going to tell her own (“If You Knew My Story”).

The story then switches to focus on returning serviceman Billy Cane (Jake Mendes), an aspiring writer who has returned from the war to find things have changed in his hometown. But one thing that hasn’t changed is his childhood friend Margo’s romantic interest in him (played by Steph Holmbo). Billy, however, is too focused on furthering his writing career to recognize her feelings (“Bright Light”).

Ambitious Billy leaves his home in Hayes Creek, North Carolina, to submit his stories to The Asheville Southern Journal, where he charms the normally unflappable and brusque editor, Alice. Much to everyone’s surprise, Alice offers Billy a chance to refine his writing for a potential article. As he settles down in Ashville to work on his submittals, the naïve Billy slowly becomes enmeshed with the Journal’s irascible employees, Daryl (a delightful Elliot Peterson) and Lucy (the lively Rebecca Spence). A woeful, but supportive Margo remains in Hayes Creek while Billy rebuffs Lucy’s romantic overtures.

Daryl and Lucy’s flirtations with Billy lead a nostalgic Alice back to 1923, when as a 16-year-old, she flirted with Jimmy Ray Dobbs (Dieter Bierbrauer) in her hometown of Zebulon, North Carolina. While Jimmy Ray is smitten by her unbridled spirit, his father has other aspirations for his son. When the young Alice inevitably becomes pregnant, she is isolated in a cabin as she divides her time by knitting for the baby and talking about their child during visits with Jimmy Ray (“I Can’t Wait”).

Shortly after giving birth to a son, Alice and her parents learn that Jimmy Ray’s father, (played by Larry Cahn) has secretly put the child up for adoption. In one of the most poignant scenes in the play, Alice tries to make him change his mind, but loses the argument (“Please, Don’t Take Him”).

Circumstances become complicated after Jimmy Ray discovers his ambitious father, threw the baby off the train in a desperate move to free his son from any obligations that would affect his future. A devastated Jimmy Ray determines that he can’t share the fate of their son with Alice and stays with his ailing father while Alice leaves to attend college. But Alice continues to yearn for her son.

The play then focuses on 1946, when Billy is about to have a story published in the Journal. In his excitement, Billy confesses to Alice that he has been writing about Hayes Creek and invites her to see where his stories take place. On her way to Raleigh to review adoption papers from the time when her son was born, Alice agrees to meet the young writer in Hayes Creek. After failing to find any records of the birth, Alice encounters Jimmy Ray and finally learns about his father’s betrayal (“I Had a Vision”).

Back in Hayes Creek, Billy finally realizes that Margo, still waiting patiently, is the girl for him (“Always Will”).

Alice eventually makes her way to Billy’s childhood home where she discovers the baby sweater she knit for her son and realizes that she is Billy’s birth mother. As his father explains how he found Billy as a baby in the river, a hurt and betrayed Billy refuses to believe the truth and runs away.

Alice reveals to Jimmy Ray that their child is still alive and old wounds begin to heal. Eventually, Billy and Margo approach the older couple and Billy accepts Alice as his mother and meets Jimmy Ray for the first time. A happy ending for both couples ends the saga.

Director Lansberry has put together a phenomenal cast. Every actor in the large crew not only fits the acting role to a “T,” but also hits the mark with the singing and dancing.

Merideth Kaye Clark absolutely owns the challenging role of Alice Murphy. She seems to effortlessly move between the time frames, casting away nearly 20 years in a mere blink of an eye. This is Clark’s debut at the Arvada Center, although she is no stranger to the stage and television. I couldn’t help but see a bit of Bette Midler in her as she enthusiastically belted out the ballads and danced atop tables at breakneck speed. Her heartbreaking rendition of “Please, Don’t Take Him” and haunting solo on “Familiar/At Long Last,” kept the audience riveted.

Dieter Bierbrauer, also making his Arvada Center debut as Jimmy Ray Dobbs, matched both the raw vocal power and honed dancing skills of Clark. His skillful combination of strength and vulnerability gave his character a needed depth and his bluegrass dancing skills were second to none.

Jake Mendes also deserves a call-out as the naïve and charming Billy Cane. His wide-eyed and unvarnished portrayal endeared him to the audience, while his singing and dance skills kept the storyline hopping. Steph Holmbo, as the left-behind, but ever-loyal Margo, brought a strength to the role that prevented the lovelorn character from being a limp stereotype.

Although the band has a significant role in the play, their stage presence is unobtrusive. Having them nestled in the back helps keep the story and song tightly knit together. A small chorus, whose members play various minor roles, also hover in the background, or move fluidly through the proceedings, performing the understated but fluid choreography created by Kitty Skillman Hilsabeck.

By now, we’re used to seeing the Arvada Center team kick out great work show after show, and Bright Star is right in line with that. As an opening statement for the theatre company’s 2019-2020 season, this one hits all the right notes.