Buntport breaks out with a wacky drive-in theatre experience

Damn, it felt good to drive to the theatre! Not since March had I seen a live performance, so I was almost giddy with excitement (or as giddy as this guy gets) on the way to see The Grasshoppers at Denver’s Buntport Theater.

But then, as I drove north, the clouds got darker, the wind was whipping up and, by the time I pulled into the Buntport’s parking lot, it looked like one of those Denver storms that would soon morph into an all-out tempest complete with rain, wind and hail.

Half expecting to be waved away by a theatre volunteer telling me the show was off, I was instead greeted by name (there are only about 10 parking spots) and told to back into a space next to a green Subaru. A cart came by and I was given a wired speaker to set on my dashboard. Four chairs sat on a narrow strip of lawn between Buntport’s tiny parking lot and Lipan Street and, before long, the game four-member cast zipped into their grasshopper outfits and got on with the show, weather be damned.

So what the hell is this thing?

The Grasshoppers is a short play, about 35 minutes, inspired no doubt by the Buntport crew’s observation that, if they were going to do a drive-in show, the actors would end up on the grass. What goes on grass? Grasshoppers! As such, the show is an extended riff on everything grasshopper: from the odd fact that they’ll barf on your hand if you pick them up (wish I’d known that when my son was collecting them in droves) to the difference between grasshoppers and locusts to the mechanics of how grasshoppers jump.

Narrated in mellifluous tones by Samantha Schmitz, The Grasshoppers is quite funny, with the actors listening to the recorded track and gesturing and mouthing words at the appropriate time. There’s even a live portrayal of a Zoom call — as meta as it gets — with obligatory barking dog in the background, frozen faces and such.

At different points, the actors interact with the audience in their cars. One gag involved combining E.E. Cummings’ poem about grasshoppers with a hail-damage flyer stuck to our windshields. With lightning flashing in the distance and real hail appearing to be a distinct possibility at the time, that one hit with great impact. 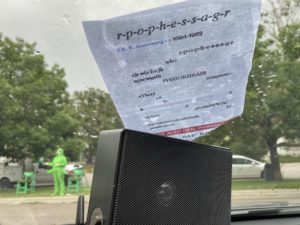 The four performers (Erik Edborg, Erin Rolllman, Brian Colonna and Hannah Duggan) are uniformly wacky and hilarious, having a lot of fun with the material and basking in the silliness of it all. Meanwhile, passersby on foot and in car slowed down to ponder the bizarre tableau of four people in grasshopper suits cavorting in front of a line of parked cars with people inside them laughing.

Toward the end, the narration cheekily swerves into metaphor-think. All shows about animals are ultimately about humans, as Schmitz intones, and this one’s no different. In the midst of our biblical coronavirus plague, why not contemplate other plagues like locusts? And did you know, she asks, about the one in the 1860s in the Rocky Mountain where 3.5 trillion locusts came in and fucked the whole place up? (This illustrated by the actors unzipping to display that figure spanned across their four T-shirts.)

That plague resulted in a turn toward religion, Schmitz tells us. And who knows what impacts the current pandemic will have.

When the metaphorical curtain dropped, we all honked our horns, handed back our speakers and drove away into the night. It was only 35 minutes, but the ever-innovative Buntport gave us something we’ve all been craving: a live theatre experience.

Currently, all the performances are sold out, but Buntport says new dates will be added. Be sure to sign up on their email list to grab tickets because they’ll go fast.

Listen to a snippet of the audio inside my car during ‘The Grasshoppers.’

What: ‘The Grasshoppers’
When: Through July 12 with more to be added
Where: Buntport Theater