In Silverthorne, Cheryl Strayed’s years as an advice columnist pack an emotional punch

The Lake Dillon Theatre Co. ushers you into the most personal details of private desperation through Tiny Beautiful Things.

The small theater has built a reputation for its big emotional, intellectual and artistic impacts, and its latest production continues to intimately engage audiences in a truly compelling manner.

Nia Vardalos (best known for the lead in My Big, Fat, Greek Wedding) culled some of the most poignant questions readers asked Cheryl Strayed (author of the memoir Wild) in an advice column she answered anonymously from 2010-12 and presented them in a script. Tiny Beautiful Things, based on Strayed’s book of the same name, shows Strayed reluctantly accept the unpaid columnist gig, struggle with how to respond and ultimately connect with people on a deep, compassionate and badass level — all while raising two kids and writing Wild.

Three actors (Sanam Laila Hashemi, Hugh Hysell and Kevin Minor) transform from one letter writer to the next, as the anxious readers of Strayed’s column, “Dear Sugar,” submit their dilemmas surrounding love, sex, affairs, death, abuse, letting go, forgiving and negotiating parent-child relationships. Their stories become more dynamic as the three actors seamlessly cross gender, age and race as they pour their heart out to Sugar (played by Sheryl McCallum).

The fact that the play consists of monologues, rather than short dialogues, could have dragged the show down, but Vardalos did an excellent job choosing excerpts of the most magnetic stories and presenting them in a specific order. The fact that three actors keep morphing into completely different characters — suddenly, and in a popcorn kind of method — could have lent this script to mockery, but director Christopher Alleman made sure he maintained the depth of humanity in it.

The end result: A touching, and sometimes humorous, window into each letter-writer’s world, as they suffer their most complex issues. 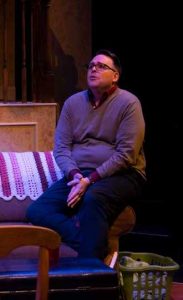 Alleman opted for less seating in the theater and moved the entire set (depicting Strayed’s kitchen and living room) 12 feet forward for a more intimate feel.

“It was a really moving experience,” one audience member said during the post-show talkback Nov. 29.

Each of the four actors relate to the material in Tiny Beautiful Things differently, but they all reach into various emotions to deliver the detailed stories in the script. McCallum probably has the most difficult job, as Strayed’s answers can run seven-plus printed pages in her book; not only does McCallum convey Sugar’s stories in her monologues, but she also naturally delivers Strayed’s elegant and deliberate syntax.

Since the play had only run for a week at Lake Dillon Theatre Co. as of Nov. 29, McCallum said she’s “still growing because there’s always something new to discover” in each line. Indeed, as each actor continues to play their parts, they find new depths of emotion within the lines, and that’s because Strayed gives enormously powerful, brave and direct advice, while, at the same time, stripping herself bare by relaying the most painful stories of her sexual abuse, heroin addiction, marriage breakup and mom’s death.

At the end of the play, when she gives advice to her younger, twenty-something self, she says: “Be brave enough to break your own heart.” The statement sums up Strayed’s personal courage and vulnerability. It’s also good advice for audience members: Lake Dillon Theatre Co. provides the quality actors, direction and setting needed to break open the hearts of audience members — if they allow it.

What: ‘Tiny Beautiful Things’
When: Through Dec. 8
Where: Lake Dillon Theatre – Silverthorne

About the Author: Kimberly Nicoletti