It’s early yet, but my pick for best moment in Colorado theater for 2019 so far is actor AJ Voliton trying unsuccessfully to say the word “nigga” in the Aurora Fox production of “Hooded – Or Being Black for Dummies.”

Voliton’s character is a black teenager who grew up in an adoptive white family in the ‘burbs. He’s being schooled in blackness by newfound acquaintance Tru (Randy Chalmers), who thinks he’s not black enough.

Not even close. Marquis is so white, if you heard him speak without seeing him you’d think he was a freshman at Exeter.

Except he’s black. He’s definitely black. A young black man in a white person’s world. And then, running from a stupid stunt in a graveyard with his dumbass white buddies, Marquis gets nabbed by the cops and tossed in the county jail for a few hours. There he meets Tru, another teen who’s there on a bullshit charge he sums up as “for being black.”

As promised by director Betty Hart and the Fox’s executive producer Helen Murray, this is a show that’s meant to make you squirm. On opening night, squirm we did — not only at the multitudinous droppings of the n-word and its various permutations but at some of the hard truths laid down by playwright Tearrance Arvelle Chisholm (who was also in the audience). As he tells it through Tru, the world Marquis lives in is utter bullshit, and the only path to salvation for Marquis is to embrace his blackness.

And a big part of that, according to Tru, is embracing the idea of “nigga.” Marquis at first won’t say it all, then complains that the term contains too many definitions, to which Tru agrees. But when Marquis mistakenly uses it with an “er” at the end, Tru shuts him down. “That’s some white thing,” he says by way of explanation.

Who’s allowed to use the n-word and in what manner is also explored in an anecdote related by Marquis’s would-be white girlfriend Clementine (Adeline Mann). She relates an experience at summer camp when she deploys the n-word after hearing her two black friends use it repeatedly.

They don’t take it kindly. But Clementine, alone among the white characters in “Hooded,” seems to have at least learned a lesson. The rest are hopeless, paper cutout stereotypes who may garner laughs through their subtle and overt racism but who nonetheless embody the worst whiteness imaginable by blacks.

Chisholm is working in hyperbole to make a point, but it’s still a bit on the nose. Listening to Marquis’s prep-school female friends tittering like Valley girls over Instagram selfies and saying things like “totes!” while the guys Hunter (John Hauser) and Fielder (Drew Hirschenboeck) are portrayed as tone-deaf dummies turns them into simply caricatures. The two black boys are much more fully realized (and portrayed beautifully by Voliton and Chalmers).

While this first 30 or so minutes of the show is full of laughs and appeared to be going more in the direction of comedy, it takes a hard left when Tru’s hastily put-together manual for Marquis on how to be black falls into Hunter’s hands. For no apparent reason, Hunter starts reading the book and adopting its maxims to morph into his own twisted version of a black man. When he tries it out on Meadow (Tara Kelso), she’s at first curious since she’s got a thing for Hunter, but soon horrified when she sees how far gone he is into the fantasy.

(Hauser, by the way, has the unenviable job of n-wording his way through this scene which, in a house half filled with African Americans, was particularly cringe-worthy.)

This sets the stage for the ultimate downfall of Hunter as well as Marquis, whose life gets increasingly bad as he becomes “more black.” Chisholm pushes him into Travyon Martin territory, gradually accruing the hoodie, the bag of Skittles and the can of Arizona fruit juice for his ultimate confrontation with a “concerned citizen” (Hirschboeck).

“Hooded” has a lot going for it, starting with a highly functional, industrial-style set, great sound design, eerie lighting and a supplemental TV screen that serves multiple purposes to strong effect. There are a ton of scene changes that tend to slow down the action, but the taut direction by Hart keeps things moving and, no doubt, those will smooth out as the run continues.

The show also benefits by all-around strong acting not only by the leads but the supporting characters as well. Mann does a nice job as the white person trying to figure out the right way to talk to her black friend (and potential boyfriend) Marquis. There’s a poignant bit where they share what they like about each other and Marquis bristles when she mentions his nice lips. She zings him back later by telling him that when a girl says she likes your lips, she’s just looking for a kiss.

Laurence Anthony Curry does a nice turn as smarmy Officer Borzoi, the black cop who seems to have it in for the black kids as bad as any white cop. (Tru’s theory about Borzoi dogs — aka Russian wolfhounds — is one of the more interesting philosophical musings he indulges in.) Jacqueline Garcia doesn’t have much to do as the third Valley girl (Prairie) but she has more fun with the role of Marquis’s mom, a hard-charging attorney and tiger mom who’s still remarkably racist for the mother of a black man.

Curry and Hirschboeck also have fun with flight-of-fancy roles as Apollo and Dionysus, respectively, although this bit fell flat. While connected to some of the boys’ reading and discussion about Nietzsche (which Tru finds in line with the words of 2Pac), the scene felt shoehorned in and didn’t add much. 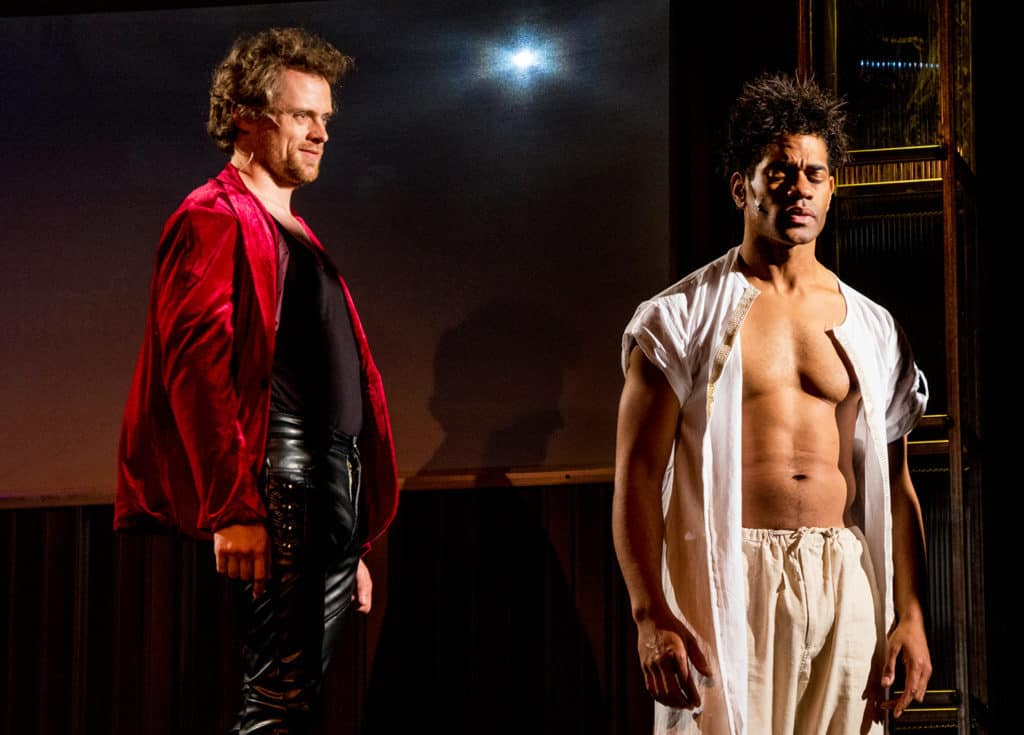 “Hooded” confronts some important issues about the tragedy surrounding black youth in America, and it did its job by inspiring some lively conversation with my wife on the ride home. As an entertainment, it’s a little tough to get one’s head around because it veers off in a lot of different directions and, in its rushed conclusion, feels forced. I get the message Chisholm is after, but the script might have been more effective with characters more realistically middle-of-the-road in their racism — and throw a genuine Steve King character in there to show the worst.

Despite some shortcomings, “Hooded or Being Black For Dummies” is an eye-opener for whites looking to understand more the tragic dilemma facing this segment of our population, while blacks will appreciate its honesty and no doubt see a lot they recognize in the characters. It was great so see such a mixed-race crowd on opening night at the Fox, and hopefully a harbinger of things to come as the theater continues to work at better representing the population it serves. 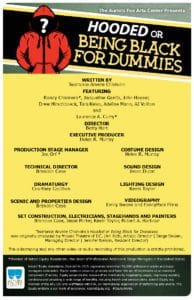 What: ‘Hooded or Being Black for Dummies’