Smoke but no sizzle from ‘Anna in the Tropics’

Anna in the Tropics” opened this past weekend at the Colorado Springs Fine Arts Center to a sparse Saturday night crowd and tepid reception. While well-acted with seasoned synergistic performers, the minimalistic set matched the dark, nearly humorless depression-era drama.

“Anna in the Tropics” is a clear departure from the FAC’s usual fare — most recently, its delightfully playful musical “Matilda” and unforgettable “Reefer Madness” a few seasons back. It’s good to mix things up, though, and “Anna in the Tropics” delivers serious, thought-provoking drama for a rarified taste.

Winner of the 2003 Pulitzer Prize for Drama, “Anna in the Tropics” is set in a Floridian Cuban-American cigar-rolling factory in 1929. As was the custom of the day, the family-owned factory hires educated and charismatic lectors to read aloud to workers enduring the rote labor. The newly arrived lector, handsome Juan Julian (Nicholas Ortiz), seeks only a stage for his craft but unwittingly catapults the characters into similar turmoil when he reads Tolstoy’s “Anna Karenina.” 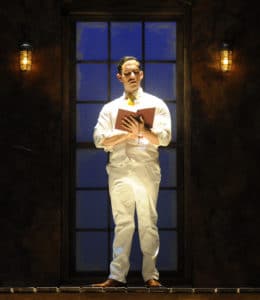 “Anna in the Tropics.” Photo by Jeff Kearney.

The storyline is a deep-dive into disappointment against a backdrop of hope in the land of opportunity for first generation immigrants. Cuban-American author Nilo Cruz certainly knows this narrative, immigrating to Florida as a boy, raised by a single mother and finding his escape in literature, poetry and, finally, play-writing. Mystifying smoke rituals with sacred tobacco leaves certainly inspired Cruz’ story, but the tale is obscure and under-appreciated amid a heavy haze of dark drama.

As the play opens, we learn that the patriarch of the family and owner of the factory, Santiago (Felipe Gorostiza), has a pesky gambling habit that’s slowly eroding his family’s legacy. His half-brother Cheche exploits the older man’s weaknesses while lusting after his beautiful niece, Marela. Alex Perez plays Cheche as a likable but subdued villain, opportunistic and cunning.

As the younger daughter, Ashley Alvarez’ Marela infuses the play with needed energy and its few light and mildly humorous moments as she gushes over the new lector.

Her husband, Paloma (A.B. Lugo) is the distant, absentee spouse, caught up in his own dalliances. He is indifferent to her cry for attention until it is too late, and his reaction turns to rage. Family ties have bound them for many years, but it seems the faraway Russian tale in a cold place plays out the same in the tropical fog of heat, cigars and smoke.

Unlike recent FAC productions, the entire cast of “Anna in the Tropics” is new to the FAC stage, with acting credits on faraway stages and even the small screen. But just like “Anna Karenina,” the characters they portray eventually succumb to their wants, ignoring the needs that will sustain them.

“Anna in the Tropics” is well-performed, but patrons should be prepared for a deep, rich and serious theatre experience that engages more than it entertains.

What: ‘Anna in the Tropics’
When: Through Feb. 24
Where: Colorado Springs Fine Arts Center
Tickets & Info

About the Author: April Tooke

An avid patron, promoter and long-past performer, April Tooke has a passion for the performing arts. A former broadcast news journalist, PR person and freelance writer, these days she’s acting the role of an administrative manager by day, but nights and weekends she's seeking out the next theatrical experience.