At The Aurora Fox, ‘The Squirrels’ is a hilarious funhouse mirror showing society at its worst

This delightfully fucked-up play is like a gag box of chocolates you’re not sure you should continue eating. The first couple may be a bit odd but still recognizable (a sauerkraut caramel or a potato praline, perhaps), but as you Gump your way through the box, the selections get increasingly bizarre. One might blow up in your hand, another oozes slime, yet another has little spikes that pop out when you try to chew it.

And then, finally, the whole box bursts into flames while maniacal laughter emanates from the woods around you.

When last we heard from the veteran Colorado actor and director, she’d moved to Hollywood to work with her choreographer sister. But The Squirrels was always going to bring her back after the Aurora Fox’s executive producer Helen R. Murray signed her on last year to direct this one. This is the kind of wacko dark comedy Moore was born to helm, and the joy she and the cast clearly had putting it together is evident in every moment on stage.

Set in the Aurora Fox’s smaller Studio Theatre, the mojo starts with a terrific cast of actors who bravely take the stage dressed in full-on squirrel suits. Their bushy tails a-flowin’, their hair wild, hands in squirrely positions and a host of woodland sounds coming from their lips, they navigate an enormous tree that serves as the main set piece. (Hats off to set designer Brandon Philip Case for one of the most extraordinary sets I’ve ever seen in such a small theatre.)

The first 30 minutes are a challenge as the audience wonders whether this is heading toward disaster or … something else. Watching people in an adult play act as squirrels with all the chirps and clicks and jerky head movements is intriguingly silly, and they do it well.

But what the hell is going on here?

We are the squirrels

The Squirrels is not a play about squirrels in the way that, say, a Beatrix Potter story is about bunnies and ducks. The squirrels here, their story, their characters, are people mirrors — types, situations and language we all recognize as belonging to our 21st century human society. Playwright Robert Askins savagely imbues these hapless squirrels with all the poison baggage we carry around with us, creating a racist, xenophobic, greedy, violent and occasionally humane group of grasping critters who look a lot like us.

This is not an easy play to act. In addition to being wrapped in fur and managing an extremely large tail, the play calls on the actors to scamper about Case’s enormous tree for two hours. (Hopefully the Fox has good insurance.) Moore does a great job managing all this fairly complex movement, as well as aligning all the squirrels with common sounds and gestures. It’s jarringly funny to be watching a character say something in English as a human would, and then punctuate it with a high-pitched chirp and snap of the head.

Teeing things up at the top of the show is the great Andrew Uhlenhopp, who does double duty as the scientist/narrator/fourth-wall-breaker and No.1 asshole squirrel. With his Einsteinian hair billowing about his head and sporting a leathery squirrel ensemble, Uhlenhopp’s Sciuridae (that there’s Latin for squirrel) character is, essentially, your Fox News host looking to sow dissent among the other squirrels — particularly with squirrel patriarch Scurius (Josh Levy).

As I’d only seen Levy in serious-as-a-heart-attack fare such as Death of a Salesman and My Name is Asher Lev in the Denver area, I didn’t recognize him at first with his enormous salt-and-pepper beard and super-furry suit. No surprise that an actor of Levy’s caliber is also great at comedy, and he appears to be having a lot of fun as the tormented, nut-hoarding conservative dad who’s “got a big heart” but isn’t sure about them red squirrels.

And stay away from his nuts! 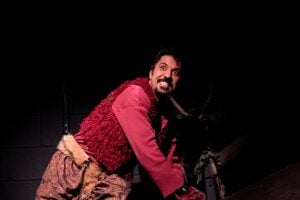 “You’re not from around here, are you?” Scurius asks Carolinensis (an excellent Hossein Forouzandeh as an exotic-looking red squirrel from “the other side of the 7-Eleven.”) It’s a racist question presented as an innocent one, and the audience laughs uncomfortably in appreciation for what’s about to happen. “Carol” is courting Scurius’s daughter Chordata (Leiney Rigg), setting up a Romeo & Juliet sitch between the reds and the grays.

In between is Rodentia (Rachel Turner) as a sexy fox squirrel who works the seams of the squirrel society to get at what she wants. Turner is tremendous in this role, not only imbuing her squirrel-ness to maximum effect but also expertly delivering deadly, bitchy zingers along the way. Contrasted with the out-front racist nationalism of Sciuridae, Rodentia is Iago, a snake of a squirrel working behind the scenes in pursuit of nuts — and someone to impregnate her.

Also in the tree is a delightful Kelly Uhlenhopp as Mammalia, the wife of sorts to Scurius and herself a scheming opportunist — but in a loving, mom kind of way. Later on, we discover it’s Mammalia who’s the ultimate squirrel power broker.

The setup — will the rich gray squirrels share their nut bounty with the impoverished and outcast red squirrels? — is a clear tale of haves and have-nots. But where will it land? When the lights went up after the long-ish first act, the audience was quiet, a bit dazed and unsure. Like we’d just been anesthetized at the gastroenterologist’s office and unprepared for what was coming next.

Any doubts we may have had about where this thing is going are quickly dispelled as Moore and cast hit the gas on Askins’s script in Act Two. As Moore writes in her show notes, “no squirrel comes out unharmed,” and the script cleverly and briskly rolls out a sequence of events that show the great squirrel unraveling.

The heat is turned up as some of the pretense in Act One is set aside and the squirrels wear all their true desires on their, um, sleeve. As a woodland Sean Hannity, Uhlenhopp is fascinating to watch as a squirrel so comfortable in his own racism that he’s willing to kill to prevent any mixed-race issue from his seed. The actor also has the enviable task of switching to narrator role at times, dispensing squirrel factoids and his grim takes on the action.

Along with all the parallel society stuff, there are lots of just-plain-funny gags — like Scurius OD’ing on his nut stash and blowing up like a furry Augustus Gloop; a very-pregnant Rodentia who Mammalia proclaims “ready to pop” after her week-and-a-half gestation; an embattled Carol in wartime mode with an eyepatch and Che beret; and a million-and-one squirrel puns and mannerisms that keep the laughs coming even atop the dystopian maelstrom swirling about a place that’s essentially the polar opposite of the Hundred Acre Wood.